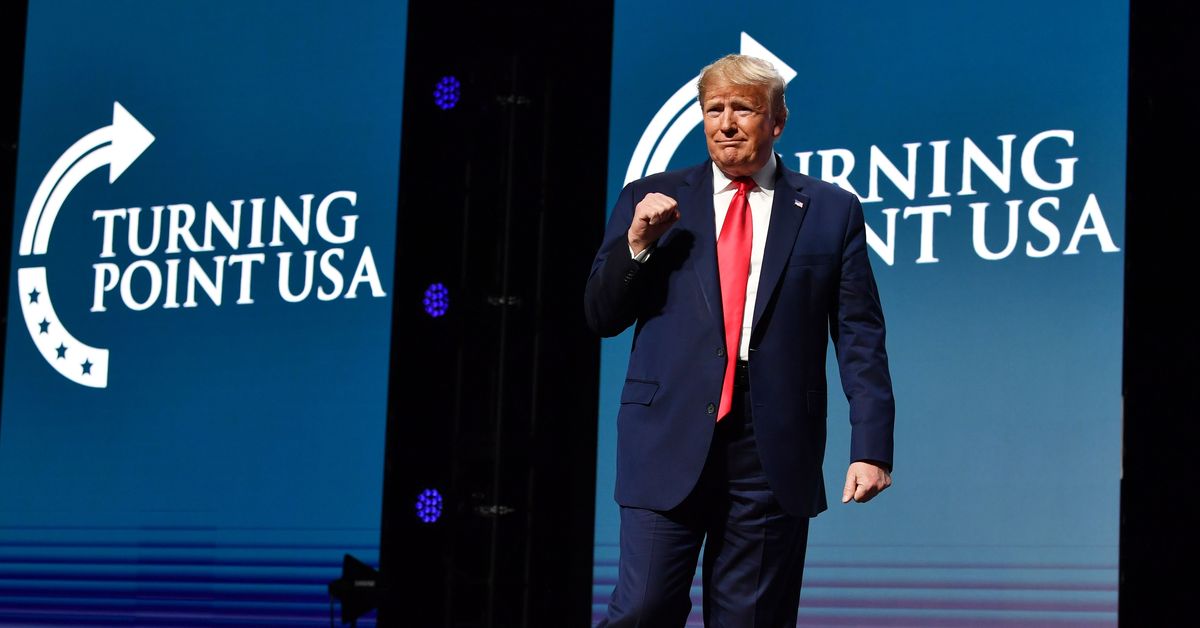 President Donald Trump has pushed a dizzying amount of misinformation about wind energy in 2019 — including, perhaps most memorably, his claim about wind turbines causing cancer — but if you’re looking for an encapsulation, you won’t find a better example than the speech he delivered on Saturday night to the Turning Point USA Student Action Summit in West Palm Beach, Florida.

During a rant about how bad the Green New Deal would purportedly be for the country, Trump made a series of false and bizarre claims about wind, including, among others, that the manufacturing of turbines creates “fumes” that “are spewing into the air;” making it sound as though wind turbines are pushing California’s bald eagle population to the brink of extinction; and, in an especially galaxy-brained moment, riffing that “you know we have a world, right? So the world is tiny compared to the universe.”

Trump began his comments about wind energy on an incoherent note, saying, “I never understood wind. You know, I know windmills very much.”

Things didn’t get much better from there. He continued:

Trump’s comments about wind turbines generating a “tremendous amount of fumes and everything” are exceedingly strange, given that the entire idea of wind energy is to generate electricity without the carbon emissions that result from coal or natural gas power plants. And while it’s true that manufacturing the component parts of turbines may result in emissions, that observation isn’t an indictment of wind energy — it’s true of any manufactured product.

From there, Trump lamented that “if you own a house within vision of some of these monsters, your house is worth 50 percent of the price.”

This claim is also false. As CNN detailed in a fact-check of Trump’s earlier comments about wind energy, “[w]hile some properties can see a decrease in value when turbines are planned and constructed nearby, several major academic studies found no statistically significant decrease in the average property value due to wind turbines in the US.”

TRUMP: “They were killing the bald eagle. If you shoot a bald eagle, they want to put you in jail for 10 years. A windmill will kill many. It’s true. And you know what? After a certain number, they make you turn the windmill off. That’s true, by the way.” pic.twitter.com/DvkJqa4MNO

Then came the part about California’s bald eagles being mowed down by wind turbines. From the White House transcript of Trump’s remarks:

You know, in California, they were killing the bald eagle. If you shoot a bald eagle, they want to put you in jail for 10 years. A windmill will kill many bald eagles. It’s true.

And you know what? After a certain number, they make you turn the windmill off. That’s true, by the way. This is — they make you turn it off after you — and yet, if you killed one they put you in jail. That’s okay. But why is it okay for these windmills to destroy the bird population? And that’s what they’re doing.

It is true that windmills kill about 100 bald eagles a year (in addition to other types of birds) in California. That’s not great, but as Philip Bump notes in the Washington Post, “It’s a weird complaint coming from Trump … since far more birds are killed by glass-covered buildings and skyscrapers like the ones he brags about building.” And fossil fuel power plants lead to far more bird deaths than wind turbines. (It is also not the case that killing a bald eagle can result in up to a 10-year prison sentence — the maximum sentence is two years).

Not only are Trump’s latest comments about turbines destroying eagle populations false, but they illustrate how impervious his falsehoods are to correction. PolitiFact first debunked this particular piece of Trumpian ignorance all the way back in May 2016, when Trump claimed during a speech that “if you go to various places in California, wind is killing all of the eagles.” And yet nearly four years later, Trump is still pushing the same false claim.

Trump’s personal distaste for wind turbines dates back at least to 2006, when they interfered with his plans to build a golf course on the Scottish coast. Since then, he has constructed an elaborate structure of falsehoods to justify his antagonism to wind energy.

Many of those false claims worked their way into Trump’s Turning Point speech. Some, however, did not. In addition to the aforementioned cancer claim, Trump also didn’t delve into a bit that’s become a staple of his rally speeches about how a reliance on wind energy would make it impossible for Americans to reliably watch their favorite television programs.

Here’s what he said about that during a speech earlier this month in Michigan:

“Darling I want to watch television tonight and there’s no damn wind, what do I do?” — Trump still thinks that wind energy means people won’t be able to watch TV reliably pic.twitter.com/w6xwi9qgfL

Those comments betray an ignorance of how batteries work and of the idea that wind is just one part of a broader renewable energy system. But his audiences don’t seem to mind — in fact, quite the opposite. For instance, after Trump wrapped up his Turning Point wind energy rant by saying, “why is it okay for these windmills to destroy the bird population?” someone in the audience yelled out, “Because they’re idiots!”

“No, but it’s true,” Trump replied, despite the fact that just about everything he just said was not true. “Am I right?”