Greens in Germany Choose Baerbock as Candidate for Next Chancellor

Annalena Baerbock, the first Green candidate to have a significant shot at becoming chancellor, will run against Armin Laschet, head of Germany’s largest conservative party. …

“We must, no matter what the outcome, reconcile, unite, become a common, big, powerful unit in this election campaign,” Mr. Söder told reporters on Monday, hours before the vote for Mr. Laschet.

Influential leaders of the Christian Democrats had been concerned by the idea of choosing the maverick Mr. Söder. Others felt that Mr. Laschet’s strong political network and focus on building consensus were the traits needed to steer the country into a post-Merkel future. They voted 31 to nine, with six abstentions in favor of the North Rhine-Westphalian governor, German media reported.

By contrast, the naming of Ms. Baerbock over the Greens’ other co-leader, Robert Habeck, 51, was harmonious. The party is positioning itself to appeal not only to Germans drawn to its traditional stance on environmental protection, but also those who seek a more dynamic, youthful presence in a country that has been under the leadership of the same conservative chancellor for 16 years.

“I want to make an offer with my candidacy for the whole of society,” Ms. Baerbock said in her acceptance speech, in which she called for improving the situation for Germans in rural regions and for low-wage workers. She also stressed the importance of ensuring that Germany meets its goals for reducing its climate-change emissions, while remaining an industrial power.

A co-leader of her party since 2018, Ms. Baerbock is respected for her attention to detail and preference for honest criticism and suggestions for improvement over fawning praise or soaring speeches. In accepting the candidacy on Monday, she acknowledged her lack of experience in political office head-on, casting it as a strength that would help her and her party to revive Germany.

“I was never a chancellor and never a minister,” 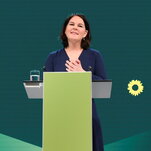