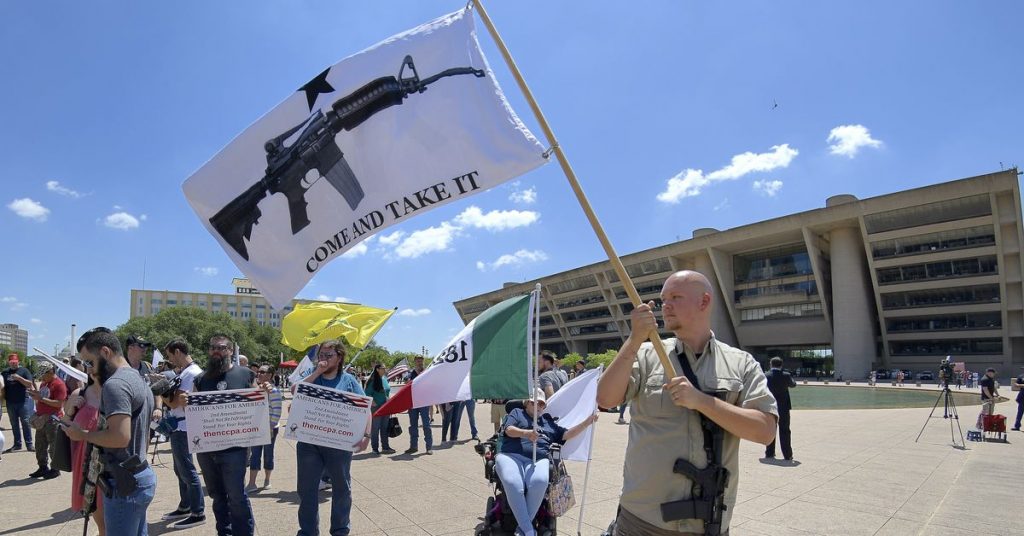 Texas Gov. Greg Abbott defended new gun laws that ease restrictions on gun owners in that state Sunday, hours after the laws went into effect and hours after a gunman shot at least 21 people, killing seven, in and around Odessa, Texas.

The new laws loosen restrictions on gun ownership and use in schools, foster homes, apartment buildings, and houses of worship. Proponents of the laws argue that they will offer people the opportunity to defend themselves from threats, while critics say expanding gun access makes people less safe.

Speaking at a press conference to discuss law enforcement’s response to Saturday’s mass shooting, during which a man with a rifle opened fire during a traffic stop before firing at random, Abbott argued that easing gun restrictions and preventing mass shootings aren’t mutually exclusive after being asked about the new laws.

“What do you say to people who look at [the new laws] and say that Texas went in the wrong direction?” a reporter asked.

“Some of these laws were enacted to make our communities safer,” Abbott responded, pointing to one law, Texas House Bill 1387, which will allow schools to hire more armed security guards.

Kris Brown, president of Brady, a group that advocates for gun reform, criticized these laws and blamed the NRA for their passage.

“Many states took the opportunity in the last two years to learn lessons from the tragedies in Las Vegas, Sutherland Springs, Parkland, and the everyday gun violence that plagues our citizens, and enacted new laws to protect public safety through expanded background checks and extreme risk laws,” Brown told CNN. “Texas lawmakers, instead … doubled down on an NRA-led agenda to encourage guns everywhere, no matter the risks and costs to safety.”

Abbott has long been a staunch advocate for gun access. He has encouraged private gun ownership, at one point telling his fellow Texans to “pick up the pace” of their gun purchases because he was “embarrassed” that California led the US in gun sales.

A pro-gun agenda has enjoyed support within the Republican-majority Texas state legislature, where ten bills became law at the end of the legislative session in June, and were signed into law by Abbott shortly thereafter. These went into effect on Sunday.

Taken together, these new laws allow licensed gun owners to store firearms in a locked car in a school parking lot and ban private apartment buildings from prohibiting gun owners from storing their weapons in their rental units. They also make it easier for people to bring guns into houses of worship, and allow some foster homes to store guns.

CNN: Today’s shootings in West Texas occurred a day before a spate of new laws easing gun restrictions are set to take effect. Here are the laws: pic.twitter.com/uPohCpWg7b

The new laws were feted by the National Rifle Association, which said Texas passed the laws to “protect your Second Amendment rights.” And they cover a large population of gun owners; according to the Rivard Report, a nonprofit news outlet out of San Antonio, nearly 1.4 million people hold active firearm licenses in Texas.

Critics fear that by expanding where firearms are allowed and what rights firearm owners have, Texas lawmakers have made mass shootings like the one in Odessa more likely.

The Odessa shooting is Texas’ second mass shooting in less than one month, and four of the 10 deadliest mass shootings in modern US history — including the El Paso shooting four weeks ago that left 22 dead — have occurred in that state. In 1991, a man opened fire on a restaurant in Killeen, near Fort Hood, killing 23. In 1966, a sniper at the University of Texas killed 18.

And in November 2017, a man murdered 27 inside a church in the small town of Sutherland Springs. That incident was repeatedly referred to during debates over the new law that allows people to bring guns into houses of worship.

In his Odessa press conference, Abbott dismissed concerns that the new laws increase the danger of mass shootings, and argued against passing legislation that would limit access to assault rifles. He claimed that laws that regulate access to such guns would not prevent massacres like the two to which he has had to respond in the last month (despite the fact that rifles were used in both), saying that the shooter who killed 10 people at a high school in a Houston suburb last May, for example, used a handgun.

Nevertheless, the governor promised concerned citizens his administration would take action on mass shootings, while declining to make specific commitments.