Almost 24 years ago, the world watched as a pair of brothers, ages 15 and 12, walked a mile through the grounds of Windsor Castle behind a horse-drawn carriage holding their mother’s coffin.

The image of the boys, Prince William and Prince Harry, heads bowed as they walked slowly alongside their father, uncle and grandfather, became seared into Britain’s national consciousness.

On Saturday afternoon, the eyes of the country and the world again turned to the brothers at a different funeral — that of their grandfather Prince Philip.

This time, much of the interest centered on the relationship between the princes, weeks after Harry and his wife, Meghan, the Duchess of Sussex, gave a searing interview to Oprah Winfrey and spoke of their differences with the royal family. Harry also described his brother and father, Prince Charles, as being “trapped” by their roles.

William and Harry both walked behind their grandfather’s coffin during a procession to the funeral service, but Prince Philip’s eldest grandchild, Peter Phillips, walked between the brothers. The brothers, like all the other mourners present, sat apart while in the chapel.

But as they left after the ceremony, the television cameras homed in on the brothers walking together away from the building. As their family left the chapel, Harry walked alongside William and his wife, Kate, the Duchess of Cambridge, and they could be seen exchanging a few words.

In his statement, William said of his grandfather, “I feel lucky to have not just had his example to guide me, but his enduring presence well into my own adult life — both through good times and 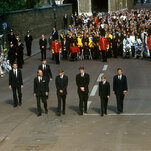