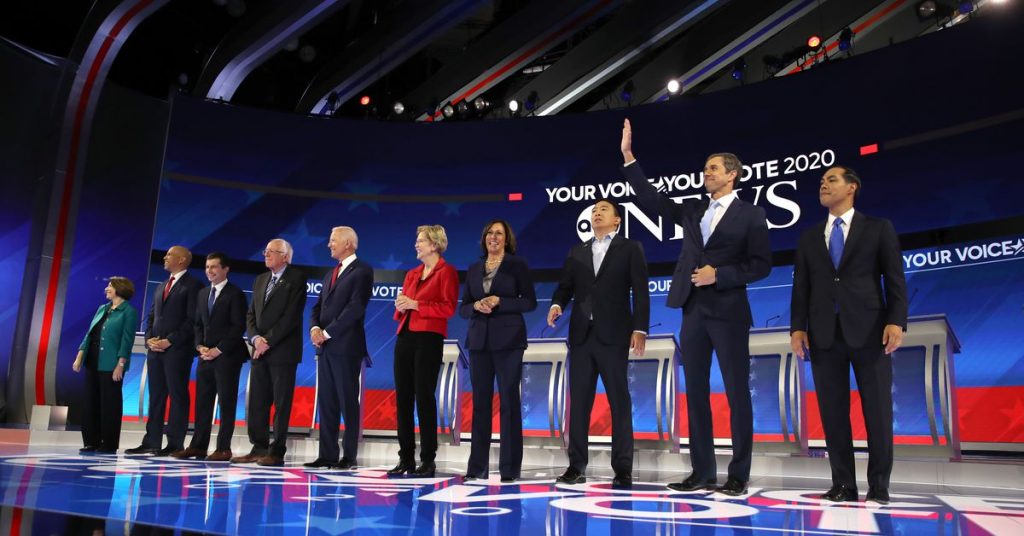 The fifth Democratic presidential debate is set to take place on November 20 in the Atlanta area, and will be hosted by MSNBC and The Washington Post. It could feature the smallest slate of candidates yet, and will be a crucial opportunity for top-tier contenders to further establish themselves as the early primaries approach.

The debate is expected to air on MSNBC and Radio One, and stream live on MSNBC.com and WashingtonPost.com. Since the criteria for making the stage is significantly tougher than that of past debates, the pool of candidates who’ll participate is expected to narrow some.

Thus far, only nine candidates have qualified, compared to the 12 who took part in October’s debate. Given the smaller field, it’ll likely be an opportunity for frontrunners Elizabeth Warren, Joe Biden, and Bernie Sanders to more explicitly confront one another, while medium-tier candidates seek a breakout moment.

As of this week, the candidates who have qualified for the November debate have done so by hitting two requirements:

The candidates who have met the polling and donor thresholds are:

Meanwhile, seven candidates have yet to reach either requirement:

Candidates will have until midnight on November 13 to make the cutoff on both fronts, though the stricter prerequisites are intended to cull the field. (For the fourth debate in October, for example, candidates were required to hit just 130,000 donors and 2 percent in four DNC approved polls.)

A number of candidates, including Sen. Kirsten Gillibrand and Gov. Jay Inslee have already dropped out after failing to make the stage in prior debates. It’s likely the new debate requirements will prompt even more to do so.

The state of the race, briefly explained

The margins between Joe Biden and Elizabeth Warren are getting closer: According to the RealClearPolitics polling average, Joe Biden and Elizabeth Warren are now going back-and-forth for first place. (About a week ago, Warren edged ahead with a slight lead, though Biden has since reclaimed it.) The polling spread currently shows Biden at 29 percent, Warren at 23 percent, and Sanders at 16 percent.

Pressure is growing on lower-polling candidates to drop out: Although a number of candidates have already dropped out, including former Colorado Gov. John Hickenlooper and New York City Mayor Bill de Blasio, the pressure is on for other 2020 candidates who are still in the race to consider calling it quits. As the DNC polling qualifications grow harder to meet, it will be tougher for many of the lower-tier candidates to participate in the televised debates, which are key for getting the platform they need to increase name recognition and expand their base of support.

The increasingly narrow debate requirements are seen as a factor that have pressed a slew of 2020 candidates to shutter their campaigns, while prompting criticism from candidates like Bullock and Gabbard who’ve failed to qualify for prior debates. The DNC has dismissed this pushback, arguing its use of polls and donor numbers means voters get to select who they want to continuing hearing from at the debates.

“As we get toward November, December, obviously we will continue to raise the bar of participation, because that’s what we’ve always done,” DNC Chair Tom Perez previously said in an interview with ABC’s This Week.

The primaries are rapidly approaching but it’s still early: With the Iowa caucus roughly four months away, the 2020 Democratic field has now begun to winnow … to nearly 20 candidates, that is.

Voters are likely paying closer attention to the November and December debates given the fast-approaching primaries, which kick off in February. According to an October poll from Rasmussen Reports, 19 percent of Democratic voters say they’ve changed the candidate they support since the debates began and 28 percent are still undecided.

Although there’s still quite a bit of time before voters officially head to the polls, support behind the top candidates is beginning to solidify, and middle-tier candidates like Harris, Buttigieg, and Booker are facing a tighter window to shore up their backing. For candidates who don’t make the stage at all, including potentially O’Rourke and Castro, the debates could also seriously limit the exposure they need to advance.

This is not to say that candidates who fail to make the November stage are sure to drop out. Candidates like Messam and Sestak have not made any of the debates so far, and have chosen to continue their campaigns. However, entering the Iowa caucus without the momentum and name recognition debate appearances bring makes winning that contest a difficult proposition at best.

In the fourth Democratic debate, the candidates treated Elizabeth Warren as the frontrunner. Vox’s Ezra Klein explains what that means for the race ahead.

Looking for a quick way to keep up with the never-ending news cycle? Host Sean Rameswaram will guide you through the most important stories at the end of each day.

Subscribe on Apple Podcasts, Spotify, Stitcher, Overcast, or wherever you listen to podcasts.