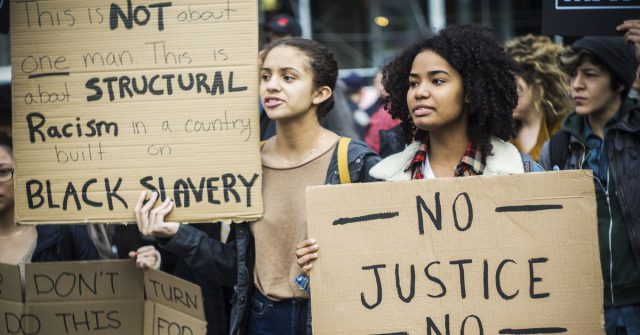 Since the civil rights movement, student protests have been a powerful driver of social change. More than 60 years later, students of color are continuing to call attention to racial injustice and inequity, fueling a growing youth movement against racism.

Alongside the Movement for Black Lives and college anti-racism movements like the 2015 University of Missouri protests, middle school and high school students in the US have become increasingly vocal about issues like police brutality, gun violence, school closings in communities of color, and racist incidents in their schools.

The latest of these protests came in March, when scandals over a racist video at a private school in New York, and online threats of violence against black and Hispanic students in Charlottesville, Virginia, drew strong reactions from students. These incidents also sparked protests that called attention to the connection between racist incidents on campus and larger patterns of racism and bias in American society.

“There cannot be any type of reconciliation without the redistribution of resources for black and brown students,” Zyahna Bryant, a community organizer, high school senior, and president of the Black Student Union at Charlottesville High School, told the Washington Post on March 25, days after a teenager had threatened an “ethnic cleansing” at the school.

In the wake of the recent school closings due to threats of White Supremacist terrorism and racial violence directly targeting Black and Brown students, the CHS BSU is calling on CCS to address ALL forms of racism with the #racialjusticewalkout
Join us tomorrow at 12 pm! pic.twitter.com/OOGXfr7CRe

The students involved in these protests, like those involved in the protests of recent years, say their demands are straightforward: They want a school environment that better responds to the needs of students of color and addresses structural inequalities. Students of color have been making these requests for decades. They say it’s time for their schools — and schools across the country — to do the work to produce lasting and systemic change.

In Charlottesville, students say they want school leaders “to back the words up with action”

On March 25, more than 100 students at Virginia’s Charlottesville High School walked out of classes to protest racism, call for an end to white supremacy, and demand racial justice.

The action came just days after a teenager in a neighboring county posted racist threats online targeting black and Hispanic students at the school. The threats lead to the closure of all Charlottesville schools on March 21 and 22.

Charlottesville is still grappling with the aftermath of the 2017 white supremacist protests that shook residents and made the city a flashpoint rising attention to white nationalism across the country.

But student activists affiliated with the school’s Black Student Union argued that their protests were about more than just online threats — and that the real problem was a series of deeper inequities in the Charlottesville City Schools system.

They say the system’s problem with racism and bias goes back much further than 2017, and fits into larger issues with structural racism and racial violence. A 2018 study from a Virginia-based legal nonprofit found that black students were 4.5 times more likely to be suspended from Virginia schools than their white and Hispanic peers. The data fits with a growing body of research about the “school-to-prison pipeline,” which finds that students from marginalized groups, particularly black students, are far more likely than white students to be exposed to the justice system through their schools.

During their protest last week, the Charlottesville student protesters also released a list of 10 demands, including increasing the number of black teaching staff in core classes, retraining the district’s school resource officers, and making African-American history classes equivalent to an honors course. The students had made several of these demands previously but used the protest to reiterate calls that the changes be enacted immediately.

The school system says it has been working to address the students’ concerns. But students argue that the system has not interacted with them on a consistent basis, and has not kept students updated on the changes it is making.

“In the past, when students of color have brought forth racial concerns, there has been no real change,” Bryant told local reporters last week. “This is the time to act and show black and brown students that they matter with lasting changes and reform. Now is not the time to pass another empty resolution. It is time to back the words up with action.”

Vox has reached out to leaders of Charlottesville City Schools and will update this post if they respond.

In New York, students of color called for “action against bias, bigotry and racism”

Less than two weeks before Charlottesville High students walked out of class, students at New York’s Ethical Culture Fieldston School, a private pre-K-12 school in the Bronx, held a “lock-in” to protest racism on campus. The protests were partially a response to a years-old video of white students saying a racial slur that had resurfaced at the school earlier this year.

When the video initially reappeared in February, school administrators said they were investigating and would discipline any students in the video who were still enrolled at the school. But students of color at Fieldston argued that the school did not offer any more details, frustrating those who felt that the school was not living up to the progressive image it presents to the public.

Students explained that the school did little to address the concerns of students of color. “I feel like our school can be a bit deceiving, because we do promote this mission of being dedicated to diversity, ethics, progressivism,” Isabella Ali, a senior at the school, told the New York Times last month.

By early March, students at Fieldston had launched a new group, Students of Color Matter, calling for reforms at the school. The group created an Instagram page and issued a list of 20 demands, calling for the school to explain how it disciplined the students involved in the video, as well as improve bias training for faculty and staff members, work to increase the number of teachers and students of color on campus, and create a new reporting system for racism and bias incidents on campus.

When those demands weren’t met, students took over several school buildings and began a lock-in on March 11.

Days later, on March 14, Students of Color Matter announced that the school had agreed to their demands. As the protests ended, students said they would begin working with administrators to enact the reforms.

But even with the protests over, Fieldston has continued to face scrutiny. On March 18, a Fieldston senior filed a lawsuit accusing school officials of discriminating against black students and ignoring racist incidents on campus. The lawsuit calls for the resignation of the school’s leader, Jessica Bagby, and a change in how the school responds to discrimination complaints.

When reached for comment about the school’s response to the protests and the recent lawsuit, a Fieldston spokesperson forwarded Vox an emailed statement sent to students and parents on March 31.

“We are ready to work on behalf of every single student so that diversity of race, ethnicity, gender, gender expression, sexual orientation, religion, and thought are seen, celebrated, taught, and treated equitably here at ECFS,” Bagby said in the statement.

The protests of the past month come amid a wave of media coverage of racist incidents in schools as well as heightened attention to racial disparities in school admissions.

While these incidents have attracted attention, the demands of students protesters suggest that these controversies are part of much deeper systemic issues and disparities in the education system and society at large.

The similarities between student demands at Charlottesville High, a public school in Virginia, and Fieldston, a private school hundreds of miles away, show that these problems are pervasive. For example, both groups of students called for their schools to employ more faculty members of color, an issue underscored by the fact that America’s public teaching force remains overwhelmingly white.

Schools in several states also continue to struggle to teach black history and how it is directly connected to modern racial disparities.

At the national level, student activists, education experts, and civil rights groups have paid heightened attention to the “school-to-prison pipeline” that sees students pushed into the justice system for things like classroom disruptions and truancy. Racial disparities in school discipline hit black and Hispanic students harder than their white peers — a 2018 report from the Government Accountability Office found that black students were far more likely to be disciplined in schools, joining a large body of research highlighting the disparity.

The students who have protested in recent weeks say these issues can’t be separated from incidents of racism at their schools. Because of this, students don’t just want their schools to change; they want to see changes in schools across the country.

“This movement isn’t just because of the recent incidents that have occurred here,” Adoniah Rigaud, a sophomore at Fieldston, told Teen Vogue in March. “It’s because events like these keep happening in our school and other schools across the globe. We’re getting to a point where it just has to stop, so we’re just trying to make as much noise as possible.”