The defendants, including the media tycoon Jimmy Lai and the barristers Martin Lee and Margaret Ng, were some of the city’s most prominent activists. …

HONG KONG — Seven of Hong Kong’s veteran pro-democracy leaders were found guilty on Thursday of unauthorized assembly, a verdict seen by their supporters as a severe assault on the freedom of speech and other civil liberties that once were core to the city’s identity.

Martin Lee, an 82-year-old barrister known as the “father of democracy” in Hong Kong; Jimmy Lai, 73, a media tycoon and founder of the staunchly pro-democracy Apple Daily newspaper; and Margaret Ng, 73, a respected barrister and columnist, along with four others, were convicted of participating in and organizing an unauthorized march in 2019.

They each face up to five years in prison, and sentences will be handed down on April 16. A severe penalty would be seen by critics of the government as an attempt to muzzle some of the most prominent and internationally recognized figures in Hong Kong’s democracy movement. It would also send a strong message about how the courts may rule in several other trials this year on similar charges of illegal assembly.

Before the hearing, some of the defendants rallied outside the court, holding a banner that read, “Oppose Political Persecution; Protest Political Suppression.” Inside the courtroom, supporters seated in the gallery cheered them on, shouting: “Keep up your spirits!”

Hong Kong’s authorities have overseen an expansive crackdown on the pro-democracy movement since the city was engulfed by antigovernment protests in 2019. More than 2,400 people have been charged as the authorities sought to quash the movement, which had posed the greatest challenge to Beijing’s rule in decades.

Beijing has sought to depict several of the opposition figures as subversive elements working with hostile foreign forces to undermine Chinese sovereignty. Critics of 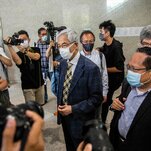