The officials and activists were detained under the national security law for their efforts to choose candidates to run in the city’s legislative elections. …

A few months later, in November, the government disqualified four pro-democracy incumbents who it said had supported or had been inadequately critical of U.S. sanctions on the city; the remaining opposition members resigned in protest.

The arrests on Wednesday heightened the possibility that many of Hong Kong’s best-known pro-democracy politicians would not be able to run in the rescheduled elections this fall, either because they could be in prison or because their arrests would give officials reasons to disqualify them.

John Lee, Hong Kong’s secretary for security, said that the arrested activists, if elected, would have tried to paralyze Hong Kong’s government and lead the city into a “bottomless abyss.”

“That is why police action today is necessary,” he said at a news conference on Wednesday.

The Chinese government applauded the Hong Kong authorities on Wednesday. Hua Chunying, a spokeswoman for the Ministry of Foreign Affairs, said the rights and freedoms of Hong Kong’s people had not been affected by the arrests.

The Liaison Office of the Central People’s Government, Beijing’s official arm in Hong Kong, singled out the arrest of Benny Tai, a former law professor at the University of Hong Kong. Officials have accused Mr. Tai, who was fired for his role in previous pro-democracy protests, of masterminding the primary election.

“We believe that the public can clearly see the evil intentions of Tai Yiu-ting and others and the danger they posed to Hong Kong society,” the office said in a statement, referring to Mr. Tai by his Chinese name.

The primary, which was held in July, was organized by the pro-democracy camp in an effort to pare down the number of candidates in the September election. Dozens of 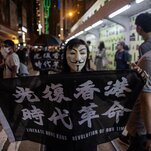