“We are moving backward fast,” said a leading figure in last year’s protests that ousted the country’s authoritarian ruler. …

ALGIERS — In a Moorish-style palace on the Algerian capital’s airy heights, the nation’s president proclaimed a new day for his country, saying it was now “free and democratic.” The old, corrupt system — in which he had spent his entire career — was gone, he insisted.

“We’re building a new model here,” said President Abdelmadjid Tebboune, 75, chain-smoking a pack of cigarettes in an hourslong interview surrounded by aides in his sumptuous office last month. “I’ve decided to go very far in creating a new politics and a new economy.”

But old habits die hard in this North African country, which has known nearly 60 years of repression, military meddling, rigged elections and very little democracy. On the streets below Mr. Tebboune’s office, Algeria’s old realities are reasserting themselves.

The state jails dissidents, and seats have been for sale — the going price was about $540,000 according to a parliamentarian’s court testimony — in the same Parliament that ratified Mr. Tebboune’s proposed new Constitution, drafted after he came to power in a disputed election in December. But the opposition is hobbled by a lack of leadership and a failure to articulate an alternative vision for the country.

popular uprising ousted the 20-year autocrat, Abdelaziz Bouteflika, and led the army to jail much of his ruling oligarchy, hopes are now fading for an overhaul of the political system and real democracy in Algeria.

“We are moving backward fast,” said Mohcine Belabbas, an opposition politician who played a major role in the uprising.

Today there are two political narratives in Algeria: the one from Mr. Tebboune, on high, and the one 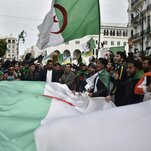