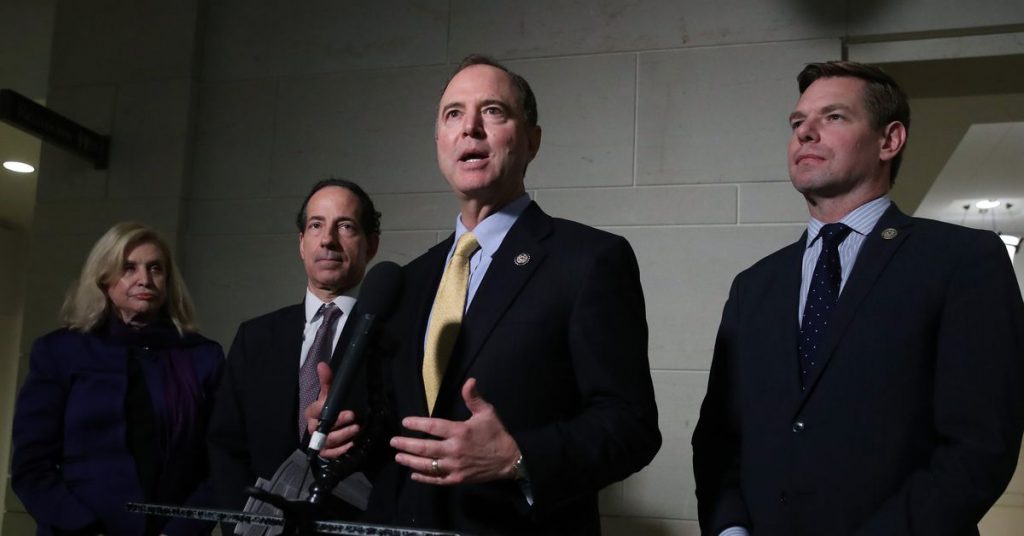 House Democrats have flatly denied Republicans’ request to call the anonymous whistleblower to testify during upcoming public impeachment inquiry hearings, and have indicated they’re unlikely to approve several others Republicans are hoping to hear from.

President Donald Trump has responded to this denial by labeling Democrat and House Intelligence Committee chairman Rep. Adam Schiff, one of the inquiry’s leaders, as “corrupt.”

House Republicans requested Saturday that several people, including Hunter Biden and the anonymous whistleblower, testify before select committees as a part of the impeachment inquiry into President Donald Trump’s dealings with Ukraine. Saturday evening, Schiff responded to that request in a letter that said Democrats will give Republicans’ wishes “due consideration,” but that the whistleblower will not be called to testify under any circumstances.

“The whistleblower has a right under laws championed by this Committee to remain anonymous and to be protected from harm,” Schiff wrote, adding that because witness testimony has corroborated the allegations the whistleblower made in his complaint, his testimony would be “redundant and unnecessary.”

All four individuals are connected to issues Trump pressed the Ukrainian government to investigate. Hunter Biden and Archer were board members on a company Trump has claimed (without evidence) Joe Biden improperly tried to aid. And Chalupa and Ohr are vaguely connected to a disproved conspiracy theory about Ukraine aiding Hillary Clinton’s campaign Trump asked the Ukrainians to look into.

The impeachment inquiry hearings “will not serve as vehicles for any Member to carry out the same sham investigations into the Bidens or debunked conspiracies about 2016 U.S. election interference that Trump pressed Ukraine to conduct,” Schiff wrote.

Schiff’s stance is unsurprising. He has defended the whistleblower against attacks by the president and his allies before, and has signaled that he plans to keep the open hearings narrowly focused.

For his part, ranking House Intelligence Committee member Rep. Devin Nunes wrote in Republicans’ Saturday letter that if the Democrats didn’t approve all of their requested witnesses, it would “constitute evidence of your denial of fundamental fairness and due process.”

Trump echoed that complaint Sunday, tweeting that Republicans are being excluded from “Pelosi’s disgraceful Witch Hunt,” and complaining about the rules of the hearings.

Corrupt politician Adam Schiff wants people from the White House to testify in his and Pelosi’s disgraceful Witch Hunt, yet he will not allow a White House lawyer, nor will he allow ANY of our requested witnesses. This is a first in due process and Congressional history!

Trump’s tweet was not completely accurate on process, however.

The White House does, in fact, have a voice in the proceedings — in their resolution laying out the impeachment inquiry’s rules, Democrats said the president and his lawyers would be allowed to participate in the hearings, offering evidence, requesting documents, and cross-examining witnesses.

And Republicans are allowed to request witnesses (although their requests must be approved by Schiff or by a majority vote of the Intelligence Committee).

Schiff’s letter notes some witnesses may be approved. And Rep. Sean Patrick Maloney, a member of the House Intelligence Committee, told Fox News Sunday, “I can’t speak for the chairman, but I think we will end up calling some of the witnesses on that list and here’s my test: Do these witnesses have important … knowledge or evidence about the president’s conduct?”

Who Republicans asked to hear from

Democrats have already scheduled public testimony in the impeachment inquiry ambassador from William Taylor, the top US diplomat in Ukraine; George Kent, an assistant secretary in the State Department; and former US ambassador to Ukraine Marie Yovanovitch.

All three of those witnesses have testified in private hearings, and all three pass Maloney’s test. Republicans have asked for a number of people to join these witnesses in public testimony — some, like Kurt Volker and Tim Morrison, have similar knowledge of the president’s attempts to pressure Ukraine into launching investigations. And it is these witnesses who House Democrats may well agree to call.

Republicans have asked that the following be brought before lawmakers:

The anonymous whistleblower — and everyone who informed his complaint

The centerpiece of the whistleblower’s complaint arguing Trump used his power to solicit election interference from a foreign country was a call between Trump and Ukrainian President Zelensky. During the call, Trump appears to offer a military aid in exchange for Ukrainian officials investigating Joe Biden and his son, Hunter. The White House has released a memo summarizing the contents of this call that reflects this request, and the whistleblower’s allegation has been supported by the sworn testimony of a number of current and former federal officials.

The whistleblower was scheduled to testify in a closed door session that was cancelled due to security concerns; he has worked to keep his identity secret in the face of threats from the president. This has led Trump and his allies to demand more information be made public about the whistleblower — and, given he compiled his complaint from a variety of sources, that those who gave the whistleblower information be brought forward as well.

Both Biden and Archer had at one point been board members of Burisma, a Ukrainian energy company. As Vox’s Andrew Prokop reported, “Archer was Hunter’s business partner for his overseas work and helped made the connection that got him and later Hunter on the board of the Ukrainian gas company.” (Archer is also, apparently, a former Abercrombie and Fitch model, Yale student, and Citibank employee.)

As far as Biden is concerned, Vox’s Matthew Yglesias and Prokop explain:

Hunter Biden is the ne’er-do-well son of the former vice president, whose questionable ethical choices have been the subject of media scrutiny for decades. Hunter has accepted large payments from several foreign sources, and he was well compensated for serving on the board of a scandal-plagued Ukrainian natural gas company called Burisma, despite having no evident qualifications for the post. Trump has claimed that Joe Biden intervened in Ukraine policy to help his son, but there’s no evidence that that’s true.

Trump’s unsubstantiated belief that Joe Biden improperly used the power of the vice presidency to aid his son is a key piece of what led him to pressure Ukraine to open an investigation. In his letter, Nunes claims Biden’s testimony is necessary to illuminate “President Trump’s longstanding and deeply-held skepticism” of Ukraine.

In a statement Saturday, Schiff made it clear he sees this request as an attempt to get Biden in front of television cameras so that the president’s allies can ask him questions that could damage his father’s presidential bid. These requests are unlikely to be granted.

In Trump’s July call with Zelensky, he mentioned another conservative conspiracy theory: that Ukrainian officials tried to help Hillary Clinton in the 2016 election. And Trump asked the Ukrainian president to investigate what he described as a Democratic National Committee server — presumably containing evidence of this assistance — that he believes is hidden in Ukraine.

As Vox’s Alex Ward has explained, these theories are untrue (and the server issue is technologically nonsensical).

However, they persist, and Republicans want to call a former DNC contractor who is at the heart of conspiracy theories about a Clinton-Ukraine connection, Alexandra Chalupa.

As Gabriela Resto-Montero has explained for Vox:

Accusations that Ukraine worked on behalf of Clinton have been floated, particularly on the right, following a 2017 report that a Ukrainian American contractor with the Democratic National Committee (DNC) passed along information about [former Trump campaign manager Paul] Manafort from Ukrainian officials to members of the Clinton campaign. That contractor, Alexandra Chalupa, told CNN she did give the DNC information about Manafort, but only what she knew about the man from her work as an activist.

Chalupa’s concerns about Manafort do not appear to be unfounded, given his business dealings with Ukraine led to a prison sentence early this year.

Chalupa, Nunes wrote, can shed light on “the facts and circumstances surrounding Ukrainian involvement in the 2016 election.”

However, there was no Ukrainian involvement in that election, and as Vox’s Alex Ward has written, officials have brought evidence proving this to Trump. Given she has little involvement in the matter at hand, and that the conspiracy theory to which she is attached has been disproved, it is difficult to see House Democrats calling Chalupa to testify.

Like Chalupa, Nellie Ohr is a figure in the conspiracy theory that promotes a Ukraine-Clinton connection.

Ohr worked for Fusion GPS, the company that hired Christopher Steele to put together a dossier on Trump that included several sensational claims that were later found to be false. Fusion GPS has been used by Democratic campaigns in the past to do opposition research; in 2016, a Democratic operative hired it on behalf of the Clinton campaign and the DNC to research Trump.

According to Nunes, Ohr told committees in 2018 that Fusion GPS sources included high ranking Ukrainians. And Ohr, the lawmaker claims, can help illuminate “the facts and circumstances surrounding Ukrainian involvement in the 2016 election.”

Again, it is known Ukraine did not meddle in the 2016 election. Like Chalupa, Ohr is highly unlikely to be called to testify.

Unlike some of the other figures on the list, Tim Morrison is an important figure in the impeachment inquiry.

He told House committee members last week that, during a meeting between US ambassador to the EU Gordon Sondland and Ukrainian officials, Sondland told the Ukrainians “it could be sufficient if the new Ukrainian prosecutor general, not President Zelensky, would commit to pursue the Burisma investigation” in exchange for the release of military aid.

Essentially, he told lawmakers there was quid pro quo: military aid in exchange for an investigation into the Bidens.

Nunes notes in the request that Morrison was on the July call during which Trump asked Ukrainians to investigate Biden in exchange for him stopping withholding military aid. Morrison’s testimony followed Taylor’s (who will testify again publicly) and corroborated much of what Taylor said. It isn’t clear whether the public testimonies of both men are needed, but unlike Biden, he may be called for the next phase of testimony.

Hale is the third-ranking official in the State Department. He spoke privately before House committees, where he was expected to say, among other things, that political machinations were a part of the agency’s decision not to defend Yovanovitch during the period leading up to her recall from Ukraine. He was also believed to have described pressure his department received from Rudy Giuliani related to removing her from her post.

Nunes writes Hale should be called because of this knowledge; however, Taylor, Kent, and Yovanovitch’s public testimonies will likely explore this territory as well.

Volker was the envoy to Ukraine between 2017 and earlier this year, when he resigned after he was named in the whistleblower report and mentioned on television by Giuliani. The whistleblower complaint describes Volker as a part of the exchange between Giuliani and the Ukrainians.

Volker gave lawmakers texts he exchanged with other officials that, as Vox’s Andrew Prokop writes, “show him as a willing participant in the effort to press Ukraine to launch the investigations Trump wanted.”

Nunes argues that if other officials like Taylor and Kent are being called for public hearings, Volker ought to be as well. Given his role, he just might be.