Had my fiancée and I, like so many of the contestants on the series, reached the end of our endurance? …

This article is part of a series on resilience in troubled times — what we can learn about it from history and personal experiences.

When I realized March wasn’t going to end like it started, I developed two obsessions. The first was drinking water out of an empty antique whiskey bottle. I liked the feel of the bottle in my hand and it stopped me from drinking actual whiskey in the middle of the day like I desperately wanted to.

The other was “Alone,” a History Channel-produced reality show in which 10 people are each left so utterly alone in the wilderness that they have to film themselves as they use their skills, knowledge and the 10 items they are allowed to bring with them to do their best to survive for as long as possible. When they want to quit, the contestants can push a “tap-out” button and be rescued. The last person standing wins $500,000. It all came down to your survival plan.

I started with season six, the only season available on Netflix. Watching the contestants in the middle of nowhere, having to adapt to this wild, jarring new normal — it all felt familiar, unsettlingly so. Sure, I was sitting on a couch in my Brooklyn apartment, not trying to build a shelter while searching for potable water. But the global pandemic immediately changed our way of life, all of us. At times it did feel like we had been left alone on some kind of rocky shoreline.

Within a few days I had binged the season. My fiancée and I were taking the stay-at-home orders 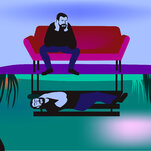