How to Have A Safe Super Bowl Sunday

Go team! Even if your watch party is small or on Zoom, there are games and other activities to get even the most casual fan involved and engaged. …

Now ignore the left-side row and top column, and fill in the remaining 100 boxes with the names (or initials) of the party attendees. There are a variety of ways to assign and barter on squares, but we’d recommend keeping it simple by randomly assigning an equal number of squares to each participant. Remember, you can include the folks watching the game with you on Zoom.

Now go back to the squares you left blank in the top column and left-side row. Write in a number from zero to nine in each square at random, using each number only once and leaving the top-left square empty. Now each square has a corresponding number for both Tampa Bay and Kansas City. (You can use the order in the template, but participants might deliberately choose certain numbers, like 7 and 4. It’s more fair to do this step after players have their assigned squares.)

The game starts when the Game starts. At the end of the first quarter, first half, third quarter and entire game, look to see which square corresponds with the current score, based on the last digit. For example, if the Buccaneers are up, 14-7, after the first quarter, look for the box where the corresponding row is 4 for the Buccaneers and the corresponding column is 7 for the Chiefs. The person whose name or initials is in that box wins that round.

Repeat the process at the end of each quarter so that there are four winners by the end of the game. Prizes after each quarter can include a hug, selecting a dessert or the next film for movie night, performing someone else’s daily chores or whatever gets the game competitive. Kids could help choose the categories. 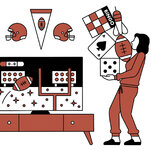