How to Learn to Read Tarot Cards

Six easy steps to ease your way into deeper introspection. …

Begin to learn to read the tarot deck

Next, the court cards. Just like in a regular deck of cards, each suit has face or court cards — usually called king, queen, page and knight.

Major arcana cards, like the Star or the Lovers, refer to bigger events in your life. Though these cards can be intimidating at first, just make sure to take your time with them and read up on all the different ways they can be interpreted. They’re always more nuanced than they seem at a glance: For example, while pulling the Death card may feel like a bad omen, it could be interpreted more innocently — that something in your life could end.

“Go with your own instincts, try to shut your brain off and write as much as you can about what you’re picking up for that card in that moment, and compile a list of definitions over time,” Ms. Morales said. “That list will become 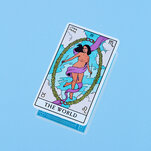