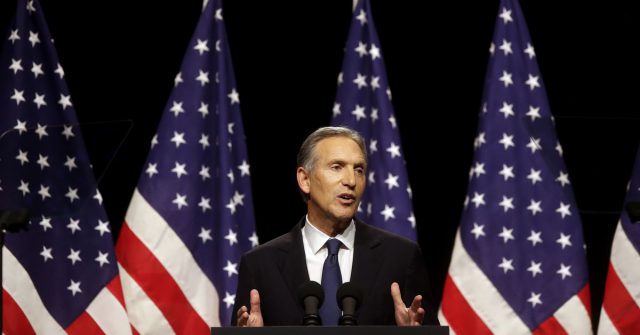 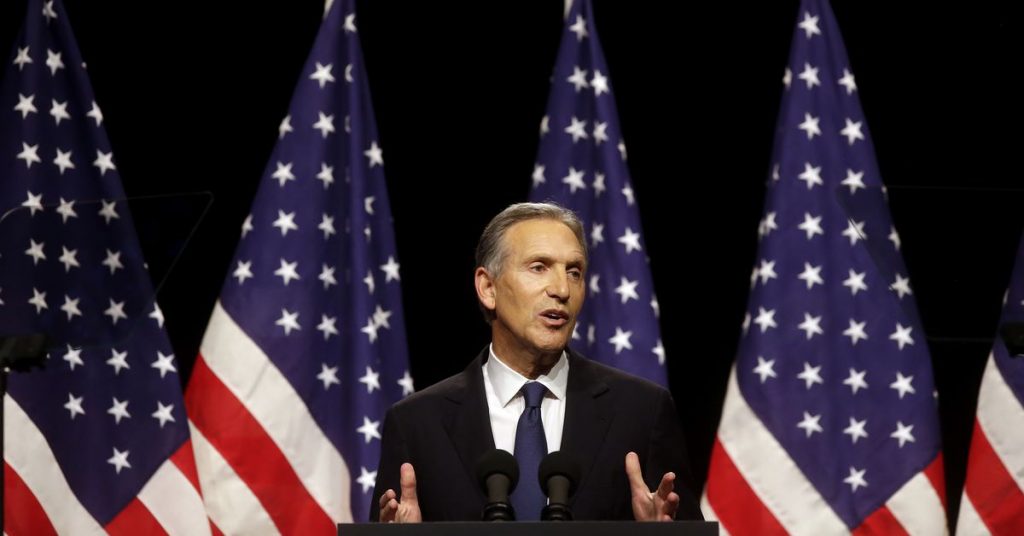 “Why am I here, and why am I considering doing this?” Howard Schultz asked during a town hall event on Thursday hosted by Fox News.

That’s what a lot of other people are wondering, too.

The former Starbucks CEO is mulling running for office as a centrist independent. A third-party candidate has never won a presidential election in the United States, but Schultz seems to believe he’s the exception — and because he’s a billionaire, he can fund his bid himself.

During the Fox News town hall hosted by Martha MacCallum and Brett Baier, Schultz tried to make the case that an independent bid makes sense — he claimed that he could run a competitive race and potentially win Electoral College votes in more than 40 states. He answered questions from the audience on a variety of issues, though he didn’t get into many details in the one-hour event.

He talked about abortion (he’s pro-choice), health care (he thinks prices are too high), trade (he’d get back into the Trans-Pacific Partnership), and the Iran deal (he’d think about it getting back into that one, too), among other issues. He also complained a lot about polarization and a need for a return to civility.

In one answer, Schultz suggested he could solve immigration by bringing Democrats and Republicans into a room and telling them “you cannot come in here with ideology and ego.” They’d then negotiate in front of an empty chair representing the American people, Schultz continued, echoing Clint Eastwood’s 2012 RNC playbook.

Howard Schultz’s plan for immigration is to put an empty chair in a room and tell politicians the chair represents the American people pic.twitter.com/V6xSVzkOJC

Schultz was also asked if he would commit to tapping a woman as his running mate. He wouldn’t, but he touted his record on gender. “I am a strong proponent of women, and I am excited to see so many women who are running for president,” he said.

In terms of policy specifics, this might be the most we’ve gotten from Schultz thus far, but he still largely spoke in generalities and offered up vague ideas. The women in the race, however, have been cranking out policy and doing the work.

So instead of outlining Schultz’s non-answers and vague policy proposals, I thought I’d take the opportunity to highlight some of the women in the 2020 race and some of the policies they’ve rolled out instead.

Howard Schultz has been to China a lot. Elizabeth Warren has a policy package to help America’s farms.

One audience member asked Schultz about what he would do to help United States farmers, especially in light of Trump’s trade aggressions with China. Schultz pointed out that he’s been to China a lot and said he’d try to get back into the Trans-Pacific Partnership, the multi-country trade deal Trump pulled the US out of in 2017.

Sen. Elizabeth Warren (D-MA) in March rolled out a broad set of proposals aimed at boosting America’s small farmers and helping protect them from corporations and big agribusiness. As Vox’s Matt Yglesias laid out, a lot of what Warren laid out is related to antitrust policy: she would appoint regulators to review and reverse mergers that hurt competition, such as the Bayer-Monsanto tie-up, and scrutinize big agribusinesses that have become vertically integrated and exert too much market control.

And, as Yglesias explained, there’s even more:

She also wants to restrict the ability of commodity checkoff programs (organizations like the Egg Board, the National Pork Board, etc.) to engage in anti-competitive practices. And she’s promising to copy Trump’s aggressive use of discretionary presidential authority over trade to force Canada and Mexico to go back to accepting country-of-origin labeling that would distinguish American livestock from foreign livestock.

Last, but by no means least, she proclaims her support for an Iowa law that sought to prevent foreigners from buying American farmland and says she will “use all available tools to restrict foreign ownership of American agriculture companies and farmland,” as well as deploying the federal government’s ability to crack down on various loopholes foreigners can exploit to get around the law.

During the Fox News town hall, Schultz stressed the importance of young people getting their first job — the types of jobs he, presumably, provided at Starbucks. He warned that if young people don’t get a first job between the ages of 17 and 19, “bad things happen,” and he wants to make sure “the first job is linked to opportunities that young people in America need.”

Sen. Kirsten Gillibrand (D-NY) is also into jobs. Jobs for everyone, in fact.

In an interview with the Nation in 2018, the New York Democrat and 2020 contender said she is behind a government-backed jobs guarantee.

“Guaranteed jobs programs, creating floors for wages and benefits, and expanding the right to collectively bargain are exactly the type of roles that government must take to shift power back to workers and our communities,” she said. “Corporate interests have controlled the agenda in Washington for decades so we can’t tinker at the margins and expect to rebuild the middle class and stamp out inequality. We need to get back to an economy that rewards workers, not just shareholder value and CEO pay.”

As Vox’s Dylan Matthews noted, the idea of a jobs guarantee is gaining steam among Democrats. But it’s a complicated subject. Some Americans are uncomfortable with the idea of the government taking such a big role in the labor market, and it’s not clear what a “good job” for everyone in the country would be. Gillibrand is taking part in a CNN town hall next week. Someone should ask her about it.

Howard Schultz thinks there are “two economies in America today.” Kamala Harris has the LIFT the Middle Class Act.

Schultz on Thursday said he gives Trump “credit for the economy being robust for many, many Americans” but acknowledged the Republican tax cuts that overwhelmingly benefited corporations and the wealthy probably wasn’t the best idea and he’d rather do something for the middle class. “We have an economy that is bifurcated,” he said.

It walks right up to the line of being a universal basic income proposal without quite getting there, Vox’s Dylan Matthews explained:

It’s a big expansion of the safety net. The Center on Budget and Policy Priorities estimates that it would lift 9 million people out of poverty. And, not for nothing, but it’s arguably the closest thing that any 2020 contender has proposed to a universal basic income, an idea that is exactly what it sounds like: a guaranteed cash benefit to every American. Harris’s office claims 80 million total Americans would benefit in some way. That’s not everyone, as under a true UBI, but it’s a big step.

Schultz talked about his success at Starbucks on Thursday a lot. He said former Defense Secretary Robert Gates being on Starbucks’s board of directors helped him learn about the military. He touted his “entrepreneurial leadership” to help grow the business. The whole thing almost seemed like a marketing ploy for Starbucks, but then again, that’s what we thought about Trump’s 2016 run for a while, too.

How that experience would transfer to infrastructure didn’t come up on Thursday, but Sen. Amy Klobuchar unveiled a $1 trillion infrastructure investment package last week.

Klobuchar’s campaign described the proposal in a Medium post and said it will be her “top budget priority” and something she focuses on in the first year of her presidency. It entails more than $650 billion in federal funding for infrastructure, including rural broadband, municipal waterworks, school construction, airports, mass transit, highways, and bridges, among other areas.

The news moves fast. Catch up at the end of the day: Subscribe to Today, Explained, Vox’s daily news podcast, or sign up for our evening email newsletter, Vox Sentences.