Images of Light: Christmas Services Penetrate Darkness Around the World

Despite the pandemic, Christmas traditions endure, shedding some brightness in a gloomy season. …

Christmas falls on one of the darkest days of the year, coming soon after winter solstice. This year, it also came during a dark time for humanity amid a worldwide viral pandemic.

“Here we are, celebrating Christmas, yet deprived of the greetings, hugs, kisses and handshakes that normally fill this day,” Cardinal Vincent Nichols, the archbishop of Westminster, said during a midnight Mass in a nearly empty Westminster Cathedral in London. “In the darkness of this pandemic, so many of our comfortable assumptions are being shaken.”

Yet the ceremonies went on, often broadcast on television or, as with the Westminster Mass, streamed online. If the pandemic has deprived worshipers of community on the holiest day of the Christian calendar, these lonely acts of faith may have shed a bit of light in the darkness.

At the cathedral of Notre-Dame in Paris, which was nearly destroyed by fire last year, the annual Christmas Eve choral concert took place, without an audience and with the medieval edifice still under reconstruction. The choir, organist and cellist, socially distanced, wore hard hats and protective coveralls.

limited to a few church officials, diplomats and Bethlehem’s mayor. 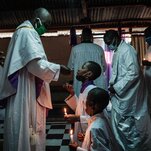