In India, a Second Wave of Covid-19 Prompts a New Exodus

Low-paid workers are starting to flee the cities en masse, just like a year ago. But their hometowns, often in far-flung places, may once again be ill prepared to test arrivals and treat the sick. …

This time, the Indian government has not locked down the whole country. But India’s cities are increasingly enforcing lockdown-like restrictions, meaning the tide of migrant workers leaving will most likely get worse. The authorities are reluctant to use the word lockdown — like shouting “fire!” in a crowded theater — but they are tightening up.

On Tuesday night, for example, the state government of Maharashtra, which includes Mumbai, banned public gatherings and ordered most businesses to close for the next two and a half weeks.

The authorities had little choice, health experts say. New daily infections are exceeding the heights of the first wave. Testing per capita is far behind that in the United States and other Western countries, so the true number of new infections is likely to be many times higher.

The official death rate, while still low compared with that of the United States and elsewhere, is rising. In the city of Surat, on the west coast, cremation grounds have been so relentlessly busy in recent days that some of the iron frames on which the bodies are placed have melted. In Chhattisgarh, a rural state in central India, morgues have overflowed with decomposing corpses.

With the virus closing in, many people have decided to flee.

“I didn’t want to get sick all alone,” said Ajay Kumar, a vendor of mobile phone covers, who left Bangalore this past weekend for a village in Jharkhand State. “In Bangalore, the cases are increasing. And my wife said, ‘Business is not so good. Why don’t you come back?’” 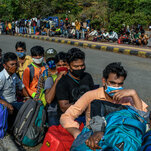