In Israeli Election, a Chance for Arabs to Gain Influence, or Lose It

Jewish politicians, including Prime Minister Benjamin Netanyahu, are courting Arab Israeli voters, and some Arab politicians are prepared to work with them. …

KAFR KANNA, Israel — Mansour Abbas, a conservative Muslim, is an unlikely political partner for the leaders of the Jewish state.

He is a proponent of political Islam. He heads an Arab party descended from the same religious stream that spawned the militant Hamas movement. And for most of his political life, he never considered supporting the right-leaning parties that have led Israel for most of the past four decades.

Yet if Mr. Abbas has his way, he could help decide the next Israeli prime minister after next month’s general election, even if it means returning a right-wing alliance to power. Tired of the peripheral role traditionally played by Israel’s Arab parties, he hopes his small Islamist group, Raam, will hold the balance of power after the election and prove an unavoidable partner for any Jewish leader seeking to form a coalition.

“We can work with anyone,” Mr. Abbas said in an interview on the campaign trail in Kafr Kanna, a small Arab town in northern Israel on the site where the Christian Bible says Jesus turned water into wine. In the past, “Arab politicians have been onlookers in the political process in Israel,” he said. Now, he added, “Arabs are looking for a real role in Israeli politics.”

Mr. Abbas’s shift is part of a wider transformation occurring within the Arab political world in Israel.

Accelerated by the election campaign, two trends are converging: On the one hand, Arab politicians and voters increasingly believe that to improve the lives of Arabs in Israel, they need to seek power within the system instead of exerting pressure from the outside. Separately, mainstream Israeli parties are realizing they need to attract Arab voters to 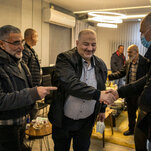