India Cuts Back on Vaccine Exports as Infections Surge at Home

A major supplier of the AstraZeneca vaccine, India is now circling the wagons and restricting exports. The impact is beginning to be felt worldwide, particularly in poorer countries. …

NEW DELHI — With its own battle against the coronavirus taking a sharp turn for the worse, India has severely curtailed exports of Covid-19 vaccines, triggering setbacks for vaccination drives in many other countries.

The government of India is now holding back nearly all of the 2.4 million doses that the Serum Institute of India, the private company that is one of the world’s largest producers of the AstraZeneca vaccine, makes each day.

India is desperate for all the doses it can get. Infections are soaring, topping 50,000 per day, more than double the number less than two weeks ago. And the Indian vaccine drive has been sluggish, with less than 4 percent of India’s nearly 1.4 billion people getting a jab, far behind the rates of the United States, Britain and most European countries.

Just a few weeks ago, India was a major exporter of the AstraZeneca vaccine, and it was using that to exert influence in South Asia and around the world. More than 70 countries, from Djibouti to Britain, received vaccines made in India, with a total of more than 60 million doses. From mid January into March, not more than a few days passed between major vaccine shipments leaving India.

data from India’s foreign ministry. And Covax, the program set up by donor agencies to purchase vaccines for poorer nations, said on Thursday that it had told those countries that nearly 100 million doses expected in March and April would face delays because of 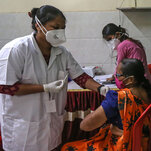