Interim results from clinical trials suggested that Covaxin could be safe and effective, potentially removing one hurdle to New Delhi’s ambitious campaign to inoculate a vast population. …

NEW DELHI — India’s ambitious but troubled campaign to vaccinate its vast population against Covid-19 — and, in the process, to burnish its own reputation as a manufacturer and innovator — just got a big boost.

An Indian drug company said late Wednesday that initial results from clinical trials involving nearly 26,000 subjects showed that a homegrown Indian vaccine was both safe and effective. The company, Bharat Biotech, said that its Covaxin vaccine had an initial efficacy rate of 81 percent.

The results from the interim analysis have yet to be peer reviewed, the company said. It was unclear how effective Covaxin would prove to be in a final analysis.

Still, the results were met with relief in India. Covaxin had been approved by government officials in January and administered to millions of people before it had been publicly proved to be safe or effective. Many people in India, including frontline health care workers, had feared Covaxin could be ineffective or worse, slowing down New Delhi’s campaign to inoculate 1.3 billion people.

Officials in Brazil, where the government had bought doses of Covaxin, had recently questioned whether this vaccine actually worked.

The results this week could alleviate some of those concerns, said Dr. Anant Bhan, a health researcher at Melaka Manipal Medical College in southern India. Still, he said, questions will linger over Covaxin until the research is completed.

“This data will now need to be examined by the regulator in India and could then have an impact on the regulatory decisions with regards to the vaccine,” Dr. Bhan said.

If the results hold, they could also benefit 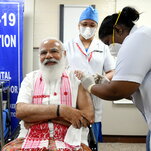