The police in Thailand, widely criticized for dropping charges against the wealthy playboy in July after he was accused of a fatal hit-and-run, are seeking the agency’s help to arrest him. …

BANGKOK — Interpol has issued a new “red notice” for the fugitive heir to the Red Bull fortune who fled Thailand after his Ferrari struck and killed a police officer in 2012, the police in Thailand said.

The notice by the global police agency, its highest-level alert, comes after the police in Thailand reopened the case. The authorities, widely criticized for dropping charges against Vorayuth Yoovidhaya, the grandson of the inventor of the energy drink, are seeking Interpol’s help in arresting him, a police spokesman said on Monday.

“We will do whatever it takes to bring him back,” said Col. Kissana Phathanacharoen, deputy spokesman for the Royal Thai Police. “We have been working around the clock to get him back to the country.” 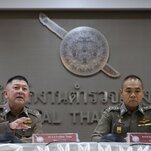