The ESPN analyst is enthralled by the 2020 series, with players isolating and “Black Lives Matter” painted on the court. …

Even in a pandemic, Jalen Rose gets his hair cut about twice a week. He likes to look sharp when he’s on TV, and these days, he and his well-groomed head are highly visible. From the basement of his house in Connecticut, the ESPN analyst and former N.B.A. player tapes “Jalen & Jacoby,” his afternoon talk show with the commentator David Jacoby. And at ESPN’s studio at the South Street Seaport in Manhattan, he helps anchor “NBA Countdown” before and during halftime of N.B.A. games — including the championship finals, which started this week between the Los Angeles Lakers and the Miami Heat.

Mr. Rose also has a new weekly column and podcast for The New York Post, and he makes frequent appearances on ESPN’s morning show, “Get Up.” His wife, Molly Qerim Rose, is a moderator for the network’s “First Take,” which means they have to share the home studio. “I need to dominate the morning before 10 a.m.,” Mr. Rose said, “because she’s live from 10 to 12 and I need to get out of the basement.”

Mr. Rose arrived on the national scene as a member of the University of Michigan’s famed 1991 “Fab Five” recruiting class, which also included Chris Webber, the future All-Star, and Juwan Howard, who now coaches the Michigan team, and whom Mr. Rose recently hit up for an appearance on his show. In his 13-year pro career, Mr. Rose played for six N.B.A. teams, including the Indiana Pacers and New York Knicks.

On the air, in addition to game commentary, Mr. Rose addresses the social and political moment. 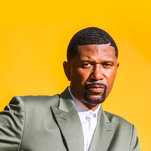