Those arrested included a member of the royal family and a longtime confidant of King Abdullah II. In a dramatic video, the country’s former crown prince says he has been silenced. …

Jordan has been hard hit by the coronavirus pandemic: more than 600,000 confirmed cases over all, more than 7,000 deaths in a population of about 11 million, and new daily cases averaging about 6,500 over the past week.

Though its government largely escaped the turmoil of the popular uprisings across the Middle East that began a decade ago in what became known as the Arab Spring, Jordan has absorbed a massive influx of about 650,000 refugees from the Syrian civil war that raged across its northern border, further stretching its already limited resources.

The situation in Jordan was being watched closely in neighboring Israel, which signed a peace treaty with the kingdom in 1994 and maintains close security ties with it.

A conversation took place on Saturday night between senior Jordanian officials and their Israeli military and internal security counterparts, according to an Israeli official, who spoke on condition of anonymity to talk about sensitive security and diplomatic issues. According to the Israeli official, the Jordanian officials told their Israeli counterparts that there had not been a coup attempt, that the situation was under control and that its gravity had been exaggerated by the news media, though they did confirm that arrests had been made.

The Israeli official said Israel viewed the event as potentially very significant and that officials there could not recall a similar event in Jordan’s past. The office of Prime Minister Benjamin Netanyahu of Israel had no immediate comment.

In his video, Prince Hamzah said he had been visited by the chief of the military’s general staff, who told him there had been criticism of the king or the government at meetings where the prince was present. 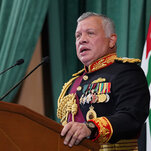