The U.S., U.K. and Australia warned of an unspecified threat outside the Kabul airport and told citizens to stay away. The warnings came in the last days of the U.S. evacuation, as thousands of desperate foreigners and Afghans tried to escape Taliban rule. …

U.S. Embassy warned Americans to stay away from the Kabul airport and told anyone outside the perimeter to “leave immediately,” citing unnamed security threats.

The warnings came as the last of the estimated 1,500 Americans and countless other foreigners still in Afghanistan try to make it to the airport to leave before the U.S. withdrawal on Aug. 31. Thousands of Afghan nationals are camped outside the perimeter of the airport in desperate attempts to escape on the last flights out, some with documents allowing them to leave.

A senior U.S. official, who spoke on the condition of anonymity about confidential assessments, confirmed that the United States was 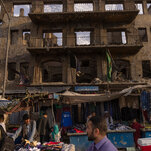