As the investigation into the killing of Haiti’s president continued, the police announced the arrest of more than a dozen people, including two Americans. International aid groups warned that a “perfect storm” of tumult could fuel an exodus from Caribbean nation. …


Here’s what you need to know:

A clearer picture of the group that Haiti accuses of assassinating President Jovenel Moïse emerged on Friday as officials in the Colombian defense ministry identified 13 suspects by name and said all were former members of the Colombian military.

Two had been killed, the officials said, and the other 11 were in custody, and they said some had traveled to Haiti as early as May.

In the past, some former members of the Colombian military, which receives heavy financial support and training from the U.S. military, have acted as hired guns following their service.

Colombians are attractive to 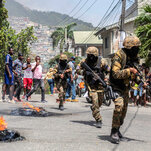