The protests in at least 40 cities represented an outpouring of anger over the treatment of women at the highest levels of power, organizers said. …

MELBOURNE, Australia — Wearing black and holding signs reading “enough is enough,” thousands took to the streets across Australia on Monday to protest violence and discrimination against women, as a reckoning in the country’s halls of power sparked by multiple accusations of rape continued to grow.

The marches in at least 40 cities represented an outpouring of anger from women about a problem that has gone unaddressed for too long, said the organizers, who estimated that 110,000 people attended the demonstrations nationwide.

With the next national election potentially coming as early as August, experts say it is something that the conservative government, which has come under stinging criticism for the way it has handled the accusations, ignores at its own peril.

The public anger in Australia over violence against women came as thousands in London joined protests last weekend over the killing of 33-year-old Sarah Everard, who disappeared while walking home at night earlier this month.

accusation that she was raped in Parliament House in 2019 rocked the nation’s halls of power and prompted Monday’s marches, appeared at the Canberra protest. She said there was a “horrible societal acceptance” 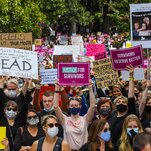