Mexico Approved the Oxford-AstraZeneca Vaccine for Emergency Use.

Health workers and soldiers in lines for the Pfizer-BioNTech Covid-19 vaccine at a military base in Mexico City last week. Mexico has also approved the Oxford-Astra Zeneca vaccine for emergency use. …

Mexico approved the Oxford-AstraZeneca coronavirus vaccine for emergency use on Monday, the country’s top epidemiologist, Hugo López-Gatell, announced in a tweet on Monday evening. It is the fourth country to approve the vaccine.

Mr. Ebrard celebrated the approval on Monday evening as “very good news,” tweeting that it would allow the country to start production “very soon.” AstraZeneca said in August it would work with the Mexican and Argentine governments to produce 150 million initial doses for distribution across Latin America, and later produce at least 400 million doses for the region.

On Monday, an 82-year-old dialysis patient in Oxford was the first person in the world to receive the clinically authorized, fully tested Oxford-AstraZeneca vaccine when Britain began administering the vaccine.

The Oxford-AstraZeneca shot is poised to become the world’s dominant form of inoculation. At $3 to $4 a dose, it is a fraction of the cost of some other vaccines.

And it can be shipped and stored in normal refrigerators for six months, rather than in the ultracold freezers required by the Pfizer-BioNTech and Moderna vaccines, making it easier to administer in poorer and harder-to-reach areas.

Mr. López-Gatell said he had incorrectly reported that a single-dose vaccine that had undergone phase three trials in Mexico by Chinese-Canadian firm CanSino 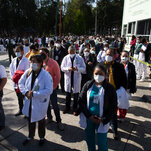