Missions to Venus: Highlights From History, and When We May Go Back

Much visited in an earlier era of space exploration, the planet has been overlooked in recent decades. …

Carl Sagan once said that Venus is the planet in our solar system most like hell. So when are we going back?

Astronomers on Monday reported the detection of a chemical in the acidic Venusian clouds, phosphine, which may be a possible sign of life. That has some planetary scientists itching to return to the sun’s second planet, especially those who feel Venus has long been overlooked in favor of Mars and other destinations.

“If this planet is active and is producing phosphine, and there is something that’s making it in the Venus atmosphere, then by God almighty, forget this Mars nonsense,” said Paul Byrne, a planetary scientist at North Carolina State University. “We need a lander, an orbiter, we need a program.”

Venus is not easy to visit. Its carbon-dioxide-rich atmosphere is 90 times as dense as ours, and surface temperatures average 800 degrees Fahrenheit. Its surface pressure is intense enough to crush some submarines.

About 40 robotic spacecraft launched by governments on Earth have tried to visit Venus in one way or another. Here are highlights from past journeys to Venus, as well as the prospects for a speedy return to the planet to find out what’s going on in those clouds.

The many Soviet visitors to Venus

In 1961, the Soviet space program began trying to explore Venus. In the decades that followed, it shot dozens of spacecraft toward the world sometimes known as Earth’s twin. While Soviet exploration of Venus started with 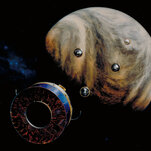