Modern Love: Auditioning for the Role of Boyfriend

When you have been strung along and ghosted by guys who play it cool, how do you handle a man who is adoring and sincere? …

“Like ‘Travels With Charley,’” he said, referencing the famous Steinbeck book that I owned but hadn’t read. He was focused squarely on me, undistracted and earnest in a way I hadn’t experienced since moving to New York from Atlanta four years earlier.

“Where are you going?”

“Everywhere. I have friends all over and family in the South, and eventually I’ll get to the West Coast.”

“I’m from Arkansas,” he said. “If you go through Little Rock, you can stay with my mom.”

I thought he might genuinely mean it. Southerners are known for their hospitality, after all. “That’d be great,” I said. “We’ll see.” I wasn’t sure how seriously to take him. “Well, I have to go now.”

“Have a good time on your trip!” He smiled, gazing at me intently.

Was he flirting? Most of my romantic prospects in New York had cultivated an air of disinterest, always scanning the room for better possibilities. I would connect with men only to have them ghost me. Assuming he was no different, I said, coolly, “Thanks, nice to meet you,” and sauntered off.

After Erica’s party, I thought about James but let go of the idea of him until a few days later, when Erica called me.

My heart somersaulted. “The one with the light-brown hair and great smile?” 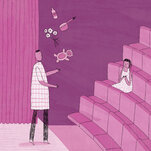