Modern Love: My Parents’ Divorce and That Two-House, Duffel-Bag Life

When my parents divorced, I lost the link that held our family together. And then I found it. …

[Sign up for Love Letter, our weekly email about Modern Love, weddings and relationships.]

In the first stage, denial, I refused to accept that my parents’ divorce was happening. I would drag my feet along with my mother or father to open houses and real estate agents’ offices. With a book or granola bar in hand, I would drift from reality and truly believe that I was going to return home that evening to them making dinner together in the kitchen, smiling and saying, “Sorry we worried you sweetie, but everything’s fine now.”

It wasn’t until they each had closed on separate houses and sold half of our furniture that I realized this fantasy was never going to turn into reality. And as soon as this two-house life became permanent, my hope quickly turned into envy, especially at the end of the school day when I would see friends greeted by both parents. Or during the sixth-grade science fair, when I would have to transport my unfinished volcano between houses while others could leave theirs untouched and permanently installed in their basement or garage, waiting to be worked on again.

Then came the depression, except I’m not sure it was really depression. I was going through the first stages of puberty, and who’s to say it was my parents’ divorce, and not hormones, that triggered my feelings of hopelessness? During this period, I spent a lot of time alone feeling indifferent. Every answer was “Sure” or “OK.” I had no opinions on anything, because even if I did, would it really change anything? No. The divorce would still be final, and my English homework would still be due in the morning. 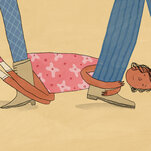