In our ruined global moment, watching something busily transform trash into fleshy, sculptural fruit is a comfort. …

Smallhold, which opened in a shipping container in the Williamsburg neighborhood of Brooklyn in 2017, has seen the sudden interest in fungi firsthand; in three years, the company has grown to 25 employees from two, and is still hiring. That’s likely linked, in part, to an expanding interest in eating mushroom varieties beyond the kind found in grocery stores: For decades, the only mushrooms the average consumer in the United States had access to were button, portobello or cremini varieties.

All three are actually the same species, just at different stages of growth. “It’s an illusion of diversity,” Mr. McInnis said. In a kingdom that contains more than a hundred thousand known species (the total number is likely to be several million), of which some 3,000 are edible, this amounts to a monoculture, not unlike our overreliance on just a few varieties of grains and vegetables.

The sudden interest in at-home mycology, specifically, seems to have a particular resonance with our times. In our ruined global moment, watching something busily transform trash into fleshy, sculptural, delicious fruit is a comfort, so it’s little wonder they’ve become popular in a pandemic.

In my apartment, once the cycle began, it didn’t stop for weeks. Every five or six days, one of my six mushroom kits would disgorge a pile of fleshy appendages, always faster than seemed reasonable. Each time I was newly shocked.

Six kits for two people quickly proved an outrageous excess. We had pounds and pounds of mushrooms to consume. I cooked oyster mushroom bourguignon, mushroom tacos, mushroom pastas. I sliced the bulbous lion’s mane into thick steaks and seared them in butter. When a few mushrooms sat out too long and shriveled, I boiled them into a mushroom stock for ramen. 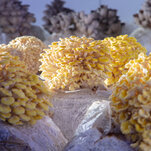