The security forces have arrested at least 56 reporters, outlawed online news outlets and crippled communications. Young people have stepped in with their phones to help document the brutality. …

Ten days after seizing power in Myanmar, the generals issued their first command to journalists: Stop using the words “coup,” “regime” and “junta” to describe the military’s takeover of the government. Few reporters heeded the Orwellian directive, and the junta embraced a new goal — crushing all free expression.

Since then, the regime has arrested at least 56 journalists, outlawed online news outlets known for hard-edge reporting and crippled communications by cutting off mobile data service. Three photojournalists have been shot and wounded while taking photographs of the anti-coup demonstrations.

With professional journalists under pressure, many young people who came of age during a decade of social media and information sharing in Myanmar have jumped into the fray, calling themselves citizen journalists and risking their lives to help document the military’s brutality. They take photographs and videos with their phones and share them online when they get access. It is a role so common now they are known simply as “CJs.”

“They are targeting professional journalists so our country needs more CJs,” said Ma Thuzar Myat, one of the citizen journalists. “I know I might get killed at some point for taking a video record of what is happening. But I won’t step back.”

the Tatmadaw, as the military is known, stamped out a pro-democracy movement by massacring an estimated 3,000 people. She said she saw it as her duty to help capture evidence of today’s violence even though one soldier had already threatened to kill her if she didn’t stop. 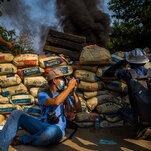