A checkpoint along a residential block advising residents to stay at home in Yangon, Myanmar, on Saturday. …

The strict stay-at-home order issued by Myanmar last week for its largest city, Yangon, barred residents from traveling from any of its 44 townships to another. There are some exceptions, such as for police officers, emergency workers and doctors.

But one group not given special status to cross township boundaries is the news media. That includes reporters, photojournalists and the drivers of newspaper delivery trucks. The exclusion prompted protests Monday from journalists and news vendors alike.

“How can we stay at home while we need to cover the news as video journalists?” said U Wai Yan, a correspondent with Xinhua, China’s state-run news agency. “If the people do not get the true news, then there might be lots of rumors, and these are toxic for people.”

With cases of the coronavirus soaring, the government has issued stay-at-home orders for Yangon, a city of seven million people. It issued similar restrictions in Rakhine State, where the first major outbreak occurred, and most recently for three townships in Mandalay, a city of one million.

New York Times database. But the rate of testing in Myanmar is among the lowest in the world and the number of cases is likely much higher.

On Sunday, the government issued a requirement that anyone seeking an exception to the travel restrictions must register online. But it included 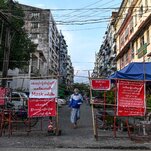