N.Y.C. public school students will have another chance, starting Wednesday, to opt in for in-person instruction.

While all parents can indicate interest, the city only has plans for now to bring more elementary school students into school buildings in April. …

New York City parents whose children have been learning remotely this year in the city’s public schools system will have another opportunity to sign up for in-person learning, starting this Wednesday until April 7, Mayor Bill de Blasio said Monday.

While all parents can indicate interest, the city only has plans for now to bring more elementary school students into school buildings in April. Mr. de Blasio said last week that younger grades will switch from six feet of distancing in classrooms to three feet, a change prompted by recent guidance from the Centers for Disease Control and Prevention on social distancing in schools. The city has not yet determined whether it will shift the distancing rules for middle and high school students.

New York City high schools also opened for in-person classes on Monday for the first time since November. The mayor said that about half of high schools will be able to offer full-time instruction for students. But some parents have expressed frustration that their children are returning to high school classrooms where they will log onto remote school along with their peers learning from home, rather than getting typical classroom instruction.

Mr. de Blasio announced Monday that over 800 city schools have lost enrollment during the pandemic but will not lose funding as a result. Federal stimulus money has allowed the city to return roughly $130 million to schools that saw budget cuts earlier this school year, the mayor said. 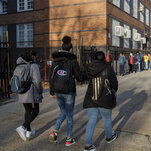