Nazanin Zaghari-Ratcliffe has been detained for five years on charges of plotting to overthrow the government that her family and supporters say are baseless. …

LONDON — Nazanin Zaghari-Ratcliffe, a British-Iranian woman who has been detained in Tehran since 2016, had her house arrest orders lifted as her sentence ended on Sunday, but her return to London remained uncertain as she faced new charges.

Over the past five years, Ms. Zaghari-Ratcliffe’s case has deepened a diplomatic rift between Britain and Iran and drawn international condemnation. But exactly what will happen next is still unclear — a common state of affairs during much of her time in custody, a period filled with raised expectations and dashed hopes for her family and supporters.

Her ankle monitor was removed, but she is still without her passport. Her husband, Richard Ratcliffe, speaking Sunday morning, said that she was “definitely pleased” to have the ankle tag off. 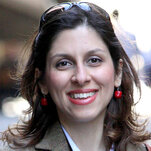