Noah Centineo Wants You to Vote

A week before Election Day, the actor opened a pop-up in Los Angeles aimed at getting influencers and their audiences to vote. …

While some celebrities are trying to boost voter turnout by showing off $700 “Vote” boots, or posting thirst traps and ballot selfies, Noah Centineo, the 24-year-old star of “To All the Boys I’ve Loved Before,” is taking a different approach.

In a last-ditch effort to get Gen Z to the polls, Mr. Centineo and his friend Josh Heller, 33, created a voting-focused pop-up gallery in Los Angeles and have been inviting big-name influencers to tour the space. The idea is that social media posts from the pop-up — which features galvanizing neon slogans like “use your voice” — might encourage their followers to cast their ballots. The gallery isn’t just a photo opportunity; it’s also a way to educate and inspire influencers to vote and speak out on big issues.

“Until everyone in America votes, or a critical mass majority votes, we aren’t going to have a good understanding of who we are and of our total values and desires,” Mr. Centineo said.

influencer hot spot BOA Steakhouse on Sunset Boulevard, has become a place to see and be seen. Visitors like Kylie Jenner, the TikTok star Larray and Anastasia Karanikolaou (a.k.a. Stassiebaby) have posted content from the pop-up on social media. Mr. Centineo is leading by-appointment tours (occasionally barefoot but always masked) through Thursday, Oct. 29. People without millions of followers can tour the space virtually.

Mr. Centineo understands firsthand the apathy many young people feel toward the 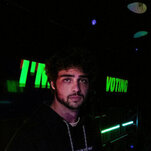