The weapon appeared to be bigger than the North’s previous long-range missile, indicating that it might be able to fly farther with a more powerful nuclear warhead. But it is untested. …

SEOUL, South Korea — North Korea displayed what appeared to be its largest-ever intercontinental ballistic missile during a nighttime military parade in Pyongyang on Saturday, but it was not immediately clear if the missile would work or was for show.

The North’s leader, Kim Jong-un, has vowed to strengthen the country’s nuclear deterrent as talks with President Trump over the country’s arsenal have stalled. The rollout of the weapon comes as Mr. Kim has struggled to keep his promises to strengthen his nation’s staggering economy.

The new ICBM appeared to be much larger than North Korea’s biggest, previously disclosed long-range missile, the Hwasong-15. The size of the new missile indicated that it might fly farther and carry a more powerful nuclear warhead, South Korean and other analysts said, although it has never been flight-tested.

North Korea has been improving its missile and nuclear technologies despite Mr. Trump’s on-again, off-again diplomacy with Mr. Kim, and the display Saturday was likely an attempt to show that more advances are being made. But it was not immediately clear if the new missiles were real, or were mocked-up versions.

test-launched the Hwasong-15 in late 2017, it claimed the missile could reach any part of the continental United States carrying a nuclear warhead. Although North Korea has conducted three ICBM tests, it remains unclear whether the country has the technology to protect a nuclear warhead during atmospheric re-entry and deliver the weapon to its target. 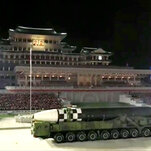