Sofia Bekatorou, a sailing champion, said she was sexually assaulted by a top sports official, prompting an outpouring of support in a country where the issue has long been ignored. …

Many victims do not speak out, Ms. Sakellaropoulou said on Monday after meeting Ms. Bekatorou, “because they know that in the best-case scenario they will face pity or mistrust and in the worst case contempt, derision, even social stigma.”

While incidents are rarely reported, studies suggest that sexual harassment in Greek workplaces is common. A poll of 1,001 women last July by the charity ActionAid found that nine in 10 had suffered unwanted advances at their workplace, with one in 10 saying that they had been victims of sexual assault. Accounts of such abuses have long swirled in Greek sports, politics and the media but are only now being documented.

Greece has made some strides in legislation for women’s rights over the years. In 2010, it adopted a law against gender-based discrimination in employment that makes sexual harassment a felony carrying a maximum three-year prison term. However, the country lags its European Union counterparts in promoting gender equality, and the harassment of women in male-dominated sectors is often brushed under the carpet.

“For decades, sexual harassment was seen as taboo, society refused to acknowledge a social reality,” Maria Syrengela, the Greek deputy labor minister in charge of gender equality, said in an emailed response to questions. “But in recent years, society has matured, it has taken steps forward.”

Among them are Mania Bikof, a retired water polo player who said she had been forced to strip to the waist so a doctor could examine a shoulder injury, and the former swimming champion Rabea Iatridou, who said she had been groped by a medic. Male athletes have spoken out too, including Nikos Kaklamanakis, another sailing 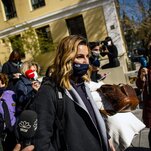