The ceremony kicked off in Fukushima Prefecture, a heavily symbolic choice a decade after the tsunami and nuclear disaster there. …

FUKUSHIMA, Japan — When Bruna Noguchi signed up to be a torchbearer for the Tokyo Olympics a year and a half ago — before the coronavirus pandemic, before the resignations of two top officials over sexist remarks — she never dreamed it could be a controversial decision.

But as the relay kicked off on Thursday morning in Fukushima Prefecture, the ceremony and those participating in it were at the center of a national debate, with many questioning whether the Games should go on in spite of the virus, the ballooning costs and other growing challenges.

While more than three dozen people, including about 20 celebrities, have withdrawn from the relay, Ms. Noguchi, 22, has decided to participate. She is one of 10,000 people who will carry the torch over the next four months, from Fukushima to Okinawa in the far south to Hokkaido in the north and on to the Olympic Stadium in Tokyo.

“I can understand the feelings of the people who have decided to withdraw from the relay,” Ms. Noguchi, who is from Gunma Prefecture, northwest of Tokyo, said in a recent interview. “But I’m not worried.”

The Japanese authorities had envisioned the start of the torch relay as a triumphant moment, and their choice of Fukushima as the launching point was heavily symbolic. Japan is calling these Games the “Recovery Olympics,” highlighting the country’s recovery from the 2011 earthquake, tsunami and nuclear disaster that ravaged Fukushima and other parts of northeastern Japan, as well as the world’s recovery from the coronavirus pandemic.

Seiko Hashimoto, the president of the Tokyo organizing committee, said that it was “very meaningful” 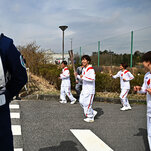