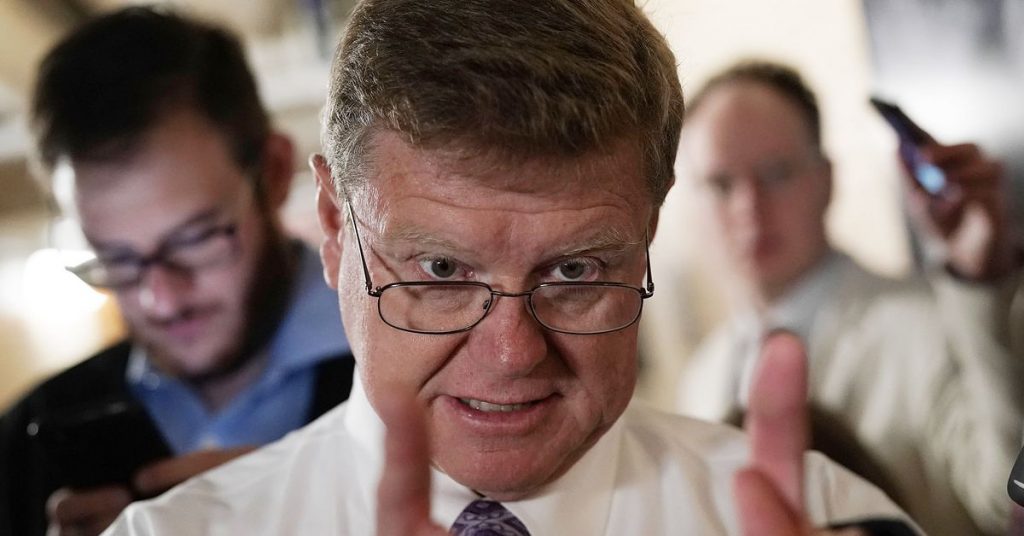 Rep. Mark Amodei (R-NV) became the first Republican in the House of Representatives to support an impeachment inquiry into President Donald Trump on Friday — placing him in stark contrast with the majority of Republicans on the Hill.

During a conference call with local reporters reporters, Amodei said he read both the whistleblower complaint and the White House’s memo on President Donald Trump’s phone call with Ukrainian President Volodymyr Zelensky, according to The Nevada Independent. During the now infamous July phone call, Trump asked Zelensky to launch an investigation into fellow presidential candidate Joe Biden as a “favor.”

The complaint and the president’s comments on the call prompted outrage from his critics, and led Democrats to accuse Trump of misusing his power in an attempt to influence the 2020 election. In response, Democrats in the House have launched an impeachment inquiry, one Republicans call unnecessary. The president maintains he has not done anything wrong, and argues he was simply acting in the country’s best interests on the call.

Amodei refrained from making any judgements about the president’s actions, but said he supports holding investigations and that he is a “big fan of oversight,” according to The New York Times.

“Using government agencies to, if it’s proven, to put your finger on the scale of an election, I don’t think that’s right,” he said. “If it turns out that it’s something along those lines, then there’s a problem.”

Although a majority of the House now supports an impeachment inquiry, Amodei is the first Republican to side with Democrats on the issue. Michigan Rep. Justin Amash, a former Republican and current independent, is the only other non-Democrat to back impeachment, something he’s supported long before the Ukraine phone call. Amodei, a four-term congressman, is the only Republican in the congressional delegation of Nevada, a swing state Trump lost to Hillary Clinton.

In a followup statement, Amodei made it clear that he’s only backing a House investigation into Trump’s relationship with Ukraine — not an impeachment itself: “In no way, shape, or form, did I indicate support for impeachment.”

Only a handful of other Republicans have publicly expressed concern over Trump’s phone call with Zelensky and the whistleblower complaint. And the few who have made their discomfort clear haven’t said much beyond calling the reports “troubling.” Rep. Mitt Romney (R-UT) said a White House summary of the phone call was “troubling in the extreme.” Sen. Pat Toomey (R-PA) called the president’s interaction with Zelensky “inappropriate.” And Rep. Mike Turner (R-OH) sent a direct message to Trump: “I want to say to the president, ‘This is not okay. That conversation is not okay.’”

The president disagrees with these opinions, and has defended himself both in front of the press and on Twitter, where he has regularly tweeted messages like, “IT WAS A PERFECT CONVERSATION WITH UKRAINE PRESIDENT!”

The reality remains that the GOP has largely fallen in line with the president’s talking points on the issue and that his party’s staunch support has barely wavered despite recent revelations. Rather, Republican politicians are lining up behind Trump, who has been working to cast the complaint as “Another Fake News Story!” And as Vox’s Li Zhou reported, many Republicans have begun attacking the credibility of the whistleblower because the complaint relies on secondhand accounts.

“What’s concerning to me is it’s based upon secondhand and third-hand reports … so you got to get more facts behind it,” Sen. Chuck Grassley (R-IA) told Vox.

But despite these attacks the central element of the complaint — the contents Trump’s call with Zelensky — has already been corroborated by the White House, both with its memo on the call and by Trump’s own statements. And the complaint as a whole has been deemed credible by Trump-appointed Michael Atkinson, the intelligence community’s inspector general.

Few Republicans, however, have attempted to defend the actual contents of the phone call. During a House Intelligence Committee hearing with acting director of national intelligence Joseph Maguire on Thursday, Republicans stuck to criticizing technical procedural issues. As Vox’s Nicole Narea noted: “Republicans could have used their hearing time to excuse Trump’s behavior or downplay it. The fact they didn’t suggests they think that’s not the strongest ground to stand on.”

Some GOP politicians, however, may have to rethink their strategies in the weeks to come. Recent polls suggest voter support for impeachment is growing: following news of the whistleblower’s complaint, support for impeachment rose from 36 percent to 43 percent in a Politico/Morning Consult poll and 43 percent to 47 percent in a a HuffPost/YouGov poll.

As Vox’s Li Zhou and HuffPost’s Ariel Edwards-Levy note, it’s still too early to judge long-term effects of these sentiments and polling on impeachment fluctuates. The numbers do suggest, however, that House leadership might be rewarded for pursuing impeachment given the public seems to be more fully onboard with the idea. And if support for impeachment continues to grow more popular — particularly in swing districts currently represented by Republicans — Amodei may no longer be the outlier in his party in supporting an impeachment inquiry.