The royal couple sat down for an interview. Here’s the back story. …

Today, CBS will broadcast a two-hour interview between the majestic ceremonial figurehead of the United States, Oprah Winfrey, and two nonworking members of the British royal family. Here’s what you don’t need to know, but might care to find out anyway.

Where can I watch the Harry, Meghan and Oprah interview?

On television, Sunday, March 7, at 8 p.m. Eastern on CBS. (It will be broadcast on ITV in Britain on Monday, March 8, at 9 p.m.) Follow live updates and analysis at The New York Times.

How did Oprah get the scoop?

The same way she overcame childhood poverty in rural Mississippi to become the world’s first Black female billionaire: time, effort and a surfeit of natural charisma. In a video clip released on Friday, Oprah recalls that she first called Meghan to propose an interview in “February or March 2018.” According to The Times of London, the two met in person that March when Oprah “found herself in London,” as one does, “and was invited by Meghan to meet her at Kensington Palace,” as one is.

invitation to Meghan and Harry’s wedding.

a statement denying rumors she had advised them on a course of action. Meghan and Harry did eventually move so close 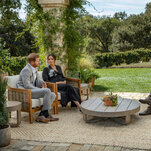