Paraguay desperately needs Covid-19 vaccines, which China could supply. That has led the South American nation to reconsider its relationship with Taiwan, which precludes it from dealing with Beijing. …

RIO DE JANEIRO — Taiwan has built thousands of homes for the poor in Paraguay, upgraded the country’s health care system, awarded hundreds of scholarships and even helped fund the futuristic Congress building in the capital, spending generously over decades to nurture their diplomatic ties.

But the alliance, which makes Paraguay one of only 15 nations to have full diplomatic relations with Taiwan, and the only one in South America, is facing an existential threat as Paraguay’s quest for vaccines becomes increasingly desperate.

With its health care system buckling as Covid-19 cases soar, Paraguayan officials across the political spectrum say the time has come to consider dumping Taiwan, which doesn’t export vaccines, in order to establish diplomatic ties with China, which does.

“This is really a life and death situation,” said Pepe Zhang, an associate director at the Atlantic Council who specializes in relations between Latin America and China. “In this very acute phase of the pandemic, less resourceful countries like Paraguay are asking where they’re going to get the vaccine.”

to rely predominantly on Chinese vaccines to blunt an epidemic that has left a brutal toll.

That has given Beijing considerable leverage in a region where it has a broad constellation of investments and projects. Suddenly, wresting Paraguay from Taiwan’s orbit — which would advance 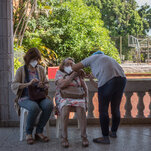