The television anchor stormed off the set of an ITV news program after his co-host, Alex Beresford, criticized his remarks about the Duchess of Sussex. …

Piers Morgan, who drew intense scorn in Britain for his upbraiding of Meghan, the Duchess of Sussex, since her bombshell interview with Oprah Winfrey, resigned on Tuesday as an anchor for ITV news after storming off the set of the network’s morning show.

The host’s hasty departure from “Good Morning Britain” punctuated a turbulent 24 hours for Mr. Morgan, who inflamed viewers on Monday when he cast doubts about Meghan’s account to Ms. Winfrey that members of the royal household had discouraged her from seeking mental health treatment when she confided in them that she had had thoughts of suicide.

Mr. Morgan’s vociferous criticism of Meghan and her husband, Prince Harry, who Mr. Morgan said had orchestrated a “two-hour trash-a-thon of our royal family” in their interview, drew more than 41,000 complaints to Ofcom, Britain’s communications regulatory authority. The agency announced on Tuesday that it had opened an investigation into Mr. Morgan’s comments under its “harm and offence” rules.

Then, on Tuesday’s broadcast of “Good Morning Britain,” the strife came to a head when another co-host, Alex Beresford, admonished Mr. Morgan for his frequent sniping at Meghan. Mr. Beresford told Mr. Morgan that he had an ax to grind with Meghan because he previously had a rapport with her and she “cut you off.”

“She’s entitled to cut you off if she wants to,” Mr. Beresford said. “Has she said anything about you since she cut you off? I don’t think she has, but yet you continue to trash her.”

Mr. Morgan then got up from his anchor chair and walked off the set. 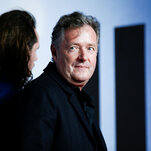