The decision, which cannot be appealed, halts pregnancy terminations for fetal abnormalities, virtually the only type currently performed in the country. …

A constitutional tribunal in Poland ruled on Thursday that abortions for fetal abnormalities violate the country’s Constitution, effectively imposing a near-total ban in a nation that already had some of the strictest abortion laws in Europe.

The debate over a woman’s right to terminate a pregnancy, a divisive issue in a staunchly Roman Catholic country, mirrors the bitter polarization of a society caught between traditional religious values and more liberal ones.

In the ruling, the tribunal’s president, Julia Przylebska, said that allowing abortions in cases of fetal abnormality legalized “eugenic practices with regard to an unborn child, thus denying it the respect and protection of human dignity.”

Because the Polish Constitution guarantees a right to life, she added, terminating a pregnancy based on the health of the fetus amounted to “a directly forbidden form of discrimination.”

Before the decision, which cannot be appealed, Poland permitted terminations only for fetal abnormalities, a threat to a woman’s health or in the case of incest or rape.

But in practice, the overwhelming majority of legal abortions — 1,074 of 1,100 performed last year — resulted from fetal abnormalities.

Abortion rights advocates say those numbers reflect the restrictions already in effect, which make it all but impossible for Polish women to obtain a legal abortion, prompting them to seek illegal abortions or go abroad.

“In practice it takes weeks, sometimes months,” to obtain a legal abortion, said Karolina Wieckiewicz, a lawyer and activist with the group Abortion Without Borders. “Some people decide to risk the battle in Poland; others look for alternatives.”

Dunja Mijatovic, the human rights commissioner of the Council of Europe, which advocates for rights and democratic rule, noted that situation in 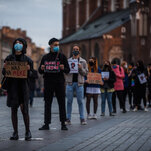