Pompeo Says Russia Was Behind Cyberattack on U.S.

Secretary of State Mike Pompeo is the first member of the Trump administration to publicly link the Kremlin to the hacking of dozens of government and private systems. …

He will not find that easy.

Mr. Trump’s tweet was his first comment on the hack, which came to light a week ago. Privately, the president has called the hack a “hoax” and pressured associates to downplay its significance and push alternate theories for who is responsible, two people familiar with the exchanges said. Larry Kudlow, his economic adviser, told reporters on Friday, “People are saying Russia. I don’t know that. It could be other countries.”

The president’s unexplained reluctance to blame Russia — which through its embassy in Washington has denied complicity in the attack — has only complicated the response, investigators say.

The government only learned of the hack from FireEye, a cybersecurity company, after the firm was itself breached. And Microsoft’s president, Brad Smith, said Thursday that government agencies are approaching Microsoft — not the national security establishment — to understand the extent of the Russian breach.

“This is the most consequential cyberespionage campaign in history and the fact that the government is absent is a huge problem for the nation,” said Dmitri Alperovitch, a co-founder of CrowdStrike, a security firm, who is now chairman of Silverado Policy Accelerator, a think tank.

“The response has been a total disaster, not just because of the president, but because whoever is left is just polishing up their resumes,” he said. “There’s no coordination and every agency is just doing whatever they can to help themselves.”

Mr. Trump’s comments on Saturday had echoes of his stance toward the hacks during 2016 presidential campaign, when he contradicted intelligence findings to claim it was China, or a “400 pound” person “sitting on his bed,” not Russia, who interfered in that election. Two years later, Mr. Trump’s own Justice 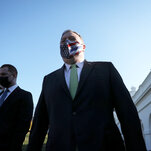