Wilton Gregory, the archbishop of Washington, who led the Roman Catholic Church’s response to the sexual abuse crisis in the early 2000s, was among 13 new cardinals named on Sunday. …

WASHINGTON — Pope Francis on Sunday named Wilton Gregory, the archbishop of Washington, a cardinal, elevating the first African-American to the Catholic church’s highest governing body, a groundbreaking act in a year when demands for racial justice have consumed the country.

The rise of Archbishop Gregory, who is also the first American named to the College of Cardinals since 2016, comes as debates over how to address the legacy of slavery and racism have extended to the Catholic church, which for centuries excluded African Americans from positions of power.

“By naming Archbishop Wilton Gregory as a Cardinal, Pope Francis is sending a powerful message of hope and inclusion to the Church in the United States,” Archbishop José H. Gomez, the president of the United States Conference of Catholic Bishops, said in a statement.

The move is the latest sign that, seven years into his papacy, Pope Francis continues to redirect the church toward greater acceptance of those on the margins. He has worked to diversify the College of Cardinals, center the poor and migrants and warned of the threat of climate change. Last week Pope Francis expressed support for same-sex civil unions, staking out new ground for the church’s recognition of gay people.

In recent months, Archbishop Gregory has urged the church’s leaders to improve race relations, recalling his time as an auxiliary bishop in the Archdiocese of Chicago, and how important it was for young Black Catholics to see a bishop who looked like them.

In August, during a Mass commemorating the 57th anniversary of the March on Washington, Archbishop Gregory said, “Ours is the task and the privilege of advancing the goals that were so 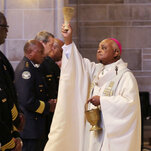