The military junta in Myanmar wants to replace its United Nations’ envoy, but he isn’t leaving. “We’re in a very unique situation,” the U.N. spokesman said. …

A conflict over who represents Myanmar at the United Nations intensified on Tuesday, with the possibility that the country’s ambassador would be clashing with a deputy assigned by the military junta to replace him.

In what amounted to high drama at the United Nations, officials were unable to rule out the prospect that the ambassador, U Kyaw Moe Tun — who is now an anti-junta celebrity — would be struggling to occupy the same seat as U Tin Maung Naing, the deputy, who, according to the junta, is now Myanmar’s voice at the global body.

“I mean, let’s be honest here. We’re in a very unique situation we have not seen in a long time,” Stéphane Dujarric, the spokesman for Secretary General António Guterres, told reporters. “We are trying to sort through all the legal protocol and other implications.”

The diplomatic tensions unfolding at the United Nations headquarters in New York came as the junta’s forces have turned increasingly violent in the month-old military takeover, ordering deadly crackdowns on protesters and the arrests of journalists covering the demonstrations. The authorities charged an Associated Press journalist, Thein Zaw, and five other members of the news media with violating a public order law that could see them imprisoned for up to three years, the A.P. reported on Tuesday.

dismissed Mr. Kyaw Moe Tun on Saturday, one day after he embarrassed the generals during an emotional General Assembly speech in which he denounced them for their Feb. 1 coup and imprisonment of civilian leaders, urged other countries to help and raised the three-finger salute, a symbol of anti-junta resistance borrowed from “The 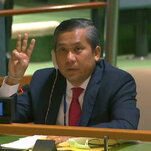