A spokesman said the head of state was feeling well despite a positive test result. A second political leader is also in isolation after he came in contact with an infected person. …

BRUSSELS — President Andrzej Duda of Poland has tested positive for Covid-19 and will go into quarantine, his spokesman said on Saturday, adding to the list of global leaders who have been infected as coronavirus cases rise unabated in several world hot spots.

“The president is feeling well,” the spokesman, Blazej Spychalski, said of Mr. Duda. The head of the presidential office said that it would “probably compile a list of the president’s contacts,” adding that this was “a new situation.”

The country’s de facto leader, Jaroslaw Kaczynski, also went into self-isolation this week, after learning that he had been in contact with someone infected with the virus. A government spokesman said that Mr. Kaczynski, the 71-year-old leader of the governing Law and Justice Party, “feels well and will continue performing his duties from home.”

Poland, the Czech Republic and Bulgaria are experiencing among the most severe outbreaks in Europe. This second wave of infection has led Poland’s government to impose new restrictions on public life starting on Saturday and to convert the country’s national stadium in Warsaw into a temporary field hospital with room for 500 coronavirus patients.

Mr. Duda visited the stadium on Friday and met with site managers, an encounter that has now raised concerns that the construction will have to be halted. He also met Iga Swiatek, who this month became the first Polish female tennis player to win the French Open.

Although Mr. Duda wore a mask and gloves during his stadium visit, Mr. Kaczynski did not wear a mask while handing out an award at a ceremony last 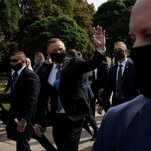