A woman set fire to her tent on the island of Lesbos in a suicide attempt after her family’s relocation to Germany was delayed. …

ATHENS — An Afghan woman is facing arson charges after trying to burn herself to death at a migrants camp on the Greek island of Lesbos this week, officials said on Thursday.

The charges are the latest in a series of punishments directed at refugees and asylum seekers on the island, rights groups say, and reflect the Greek government’s hard line on migrants. The episode is also a stark example of the impact that the dire conditions at Greek reception centers have on refugees’ mental health.

The woman, 27 and eight months pregnant, lives at a temporary camp with her husband and three children. She set her tent alight on Sunday after being told that her family’s planned relocation to Germany was being postponed, a Greek migration ministry official said, noting that her journey had been delayed because of the advanced state of her pregnancy.

The woman, whose name was not released by the authorities, sat inside her burning tent in an attempt to kill herself and was hospitalized with non-life-threatening burns after neighbors dragged her from the blaze, a Lesbos fire service official said. No one else was injured.

Thousands of people are living in desperate conditions at Greece’s camps for refugees and migrants dotted along its islands, a situation that human rights groups consistently denounce as inhumane. Groups have long warned of a growing mental health crisis there as the thousands who fled war and economic hardship remain in limbo.

Although the number of migrants crossing the Aegean by boat from Turkey to the Greek islands has dropped sharply this year — by more than 90 percent in January, according to the authorities — the camps remain crowded. Dozens of 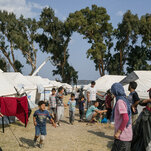