Remember Brexit? It’s still not over. 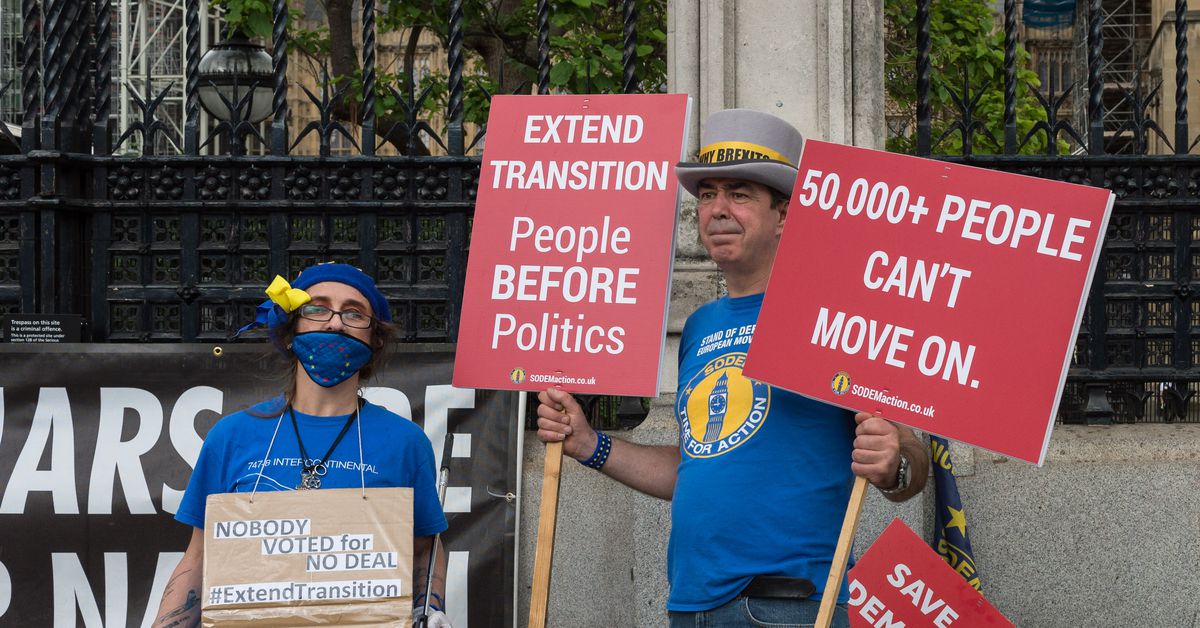 Brexit is probably not at the top of anyone’s mind in the middle of a historic pandemic, but both Europe and the United Kingdom are agreeing it’s time to start talking about it again.

The United Kingdom officially exited the European Union in January, but the divorce was far from finalized.

The UK’s departure kicked off the next, harder phase of Brexit: figuring out the future relationship between the EU and the UK. Right now, the UK and the EU are still in a transition period as they try to forge that new partnership.

And the two sides are very much still working the entire thing out.

“They got stuck on some pretty big and basically political issues,” John Springford, deputy director of the Centre for European Reform in London, told me. “In order to unstick it, it’s going to require political intervention on both sides. That’s why nothing much has happened — and coronavirus matters. Because politicians aren’t going to put a lot of effort into this because they’re completely consumed with the pandemic.”

So yes, progress has stalled. The coronavirus does get some of the blame, as it has complicated an already testy process. The pandemic has consumed the attention of leaders as they try to manage the pandemic and the economic fallout. Brexit talks were relegated to video conferences, making impossible the side chatter and dealings often critical to diplomacy. The top negotiators for the EU and the UK both had to go into isolation with coronavirus symptoms.

But, even so, the same sticking points that existed when Britain left the EU are still, well, sticky. The two sides have mostly just traded barbs and stayed pretty much deadlocked.

The pandemic also hasn’t changed the negotiation timeline. This month, the UK government has formally ruled out extending the transition period another year, which means both sides have to come up with an agreement before December 31, 2020. Which is now just about six months away.

In the face of this impasse, EU and UK leaders held high-level talks on June 15 — Johnson and European Commission President Ursula von der Leyen, among other top EU figures — and conceded both sides needed “new momentum” and agreed to intensify talks through the summer to try to reach a deal.

Johnson urged the EU to “put a tiger in the tank,” suggesting he wanted to hash out a deal by the summer. Charles Michel, the European Council president, replied that the EU is “ready to put a tiger in the tank but not to buy a pig in a poke,” which basically seems to be a way of saying the EU is willing to negotiate, but not at a high price.

Tigers, tanks, pigs, pokes — whatever it is, the two sides are still at odds when it comes to an agreement, and the time frame is growing shorter, in case this at all sounds familiar. And it’s not all that surprising the EU and the UK ended up here.

“If you reckon that this is a cross between a trade negotiation and the aftermath of a breakup, it’s normal,” David Henig, the director of the UK trade policy project at the European Centre for International Political Economy, told me.

Normal for Brexit, that is. Because historic trade talks on a tight timeline during a global economic crisis and pandemic is anything but.

A post-breakup relationship is hard to do

The UK and the EU are in a standstill period until December 31, 2020 — basically, the UK is officially out of the EU, it has lost its decision-making power, but it is still following EU rules. Johnson has ruled out extending it, a decision he had to make by the end of this month. So now the two sides are careening toward that deadline.

Experts told me that while December 31, 2020, is the deadline, a framework for a deal really needs to take shape by the fall in order to leave time to ratify and implement the deal.

The two sides need to come up with a free-trade agreement, but they also have to deal with a slew of other issues, from fishing to security cooperation. And there are still many questions about how the UK will put into place the new protocol for trade in Northern Ireland.

One of the biggest issues causing headaches in Brussels and London right now is that of a “level playing field.” This was always going to be the big one. Johnson and the UK want zero tariffs, zero quotas in a free-trade deal with the EU.

The European Union says that’s nice, but if that happens, then the UK needs to maintain the same regulatory standards on labor and the environment as the EU. The UK government is resisting this condition because it doesn’t want to be tied to EU rules.

There’s also some tension over the fisheries policy. Even though it’s just a small chunk of the overall UK economy, it’s always been an outsized issue in the Brexit debate because Brexiteers championed it as a symbol of national sovereignty.

EU fisherman fish in Britain’s waters, but the UK wants to put in tighter restrictions. The EU wants to keep its access, with some EU states more passionate about this than others. At the same time, the UK can’t go too far to protect its fisherman, as it exports much of what it catches to the EU.

Another sticking point is dispute resolution, or what happens when one side accuses the other of breaking the rules. An independent arbitration panel will likely be established, but the EU and the UK have some issues on jurisdiction, particularly when it comes to the European Court of Justice.

Compromise is always possible, it’s just not totally clear at the moment where it’s about to come from. Johnson’s meeting with EU leaders was, at least, a somewhat optimistic sign that the two sides needed a bit of a reset.

“Now they’ve kind of been given a bit of a push to see if they can get on with it and stop yelling at each other,” Henig said. “So now we see whether they can do that or not. There’s still some pretty tricky issues, and still a huge amount of detail behind this.”

A deal is still possible, and it’s in the interests of both sides. But it’s going to require concessions on both sides which have not, to date, happened. And as Henig pointed out, it is a breakup. This is not just a straightforward trade negotiation. Emotions are involved.

And so, once again, the no-deal Brexit is possible.

A deal is always possible, but is it probable?

Unlike the first phase of Brexit, where the deadline kept getting delayed and delayed and delayed, that possibility is a little less likely here. The current December 2020 cutoff is written into the Brexit deal between the UK and EU, which is now an international treaty. The UK could have extended it but had to make that choice by the end of June, and it declined to do so.

That may add to the urgency of the negotiations — or increase the possibility of a no-deal. The summer talks could bring the breakthrough that the EU and UK need, or they could not.

“It is not inconceivable, but it is improbable I would say because the UK is very dug in, and because it will be difficult for the EU with its 27 member-states to reach agreement on compromises on some of the core issues,” Michael Leigh, a senior fellow at the Bruegel Institute in Brussels and professor at Johns Hopkins University, told me. “So it’s too early to write it off. One could see it happening, but on balance, as of today, it doesn’t seem likely.”

That would be bad. All the catastrophically disruptive things that could have happened if the UK left the EU without a plan in place before Brexit could still occur if the two sides reach the end of the transition period without agreements.

That’s because once the transition period expires, all the trade and regulatory arrangements the UK was following will end. The two sides will trade under World Trade Organization rules, which sets the tariffs and quotas between countries that don’t have free trade agreements in place with each other.

Checks and controls could create massive and disruptive gridlocks at ports of entry. A few thorny issues have been (somewhat) settled, including Northern Ireland’s border with Ireland. But, in general, a 2020 no-deal could still look a lot like the one experts predicted before Brexit became official.

This is an outcome both the UK and the EU want to avoid. Like last time, it will be bad for both the EU and the UK, but far worse for the UK. Unlike last time, the entire world is reeling from the pandemic and the deep economic pain it caused, making the worst-case scenario sound that much grimmer.