The Philippine lieutenant was slashed by a razor-sharp spur attached to the bird’s leg during a raid on an illegal cockfighting den. …

MANILA — A police officer in the Philippines was killed this week after a fighting rooster slashed him during a raid on an illegal cockfighting den to stop the spread of the coronavirus.

The officer, Lt. Christian Bolok, 38, was part of a team that descended on an arena in the province of Northern Samar on Monday, after it was suspecting of violating lockdown rules against mass gatherings.

“There was a commotion, the spectators scampered away, and when the dust cleared, Officer Bolok tried to pick up one of the birds, but he didn’t notice that it still had bladed spurs on,” the provincial police chief, Col. Arnel Apud, said in an interview.

Fighting roosters typically have a razor-sharp steel blade called a gaff attached to their legs, and the bird Lieutenant Bolok grabbed slashed him with one.

struggled to enforce lockdown and social-distancing rules. In New York, recent “superspreader” events — a wedding and party — have led to the infection of 56 people and forced nearly 300 others into quarantine. In Australia, 16 people broke coronavirus restrictions in July by attending a surprise birthday event in a suburb of Melbourne, leading to hefty fines.

In the Philippines, which has confirmed 375,180 cases of the virus and 7,114 deaths, security forces help maintain lockdown 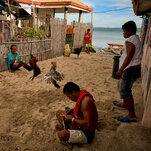